(CNN) -- Holders Manchester United remain on course to become the first side to retain the Champions League, as two goals in the first 11 minutes saw them defeat Arsenal 3-1 for a 4-1 aggregate victory and a place in the final against either Chelsea or Barcelona in Rome. 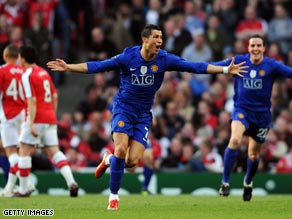 A carnival atmosphere at the Emirates Stadium saw the home fans optimistic that last week's 1-0 defeat at Old Trafford could be overturned, but those hopes were cruelly dashed as two individual mistakes allowed United to take a foothold in the game -- a position they never looked likely to relinquish.

Arsenal went into the match unbeaten in their last 27 home matches in Europe, since Chelsea defeated them 2-1 at Highbury in 2004, and had yet to taste European defeat at the Emirates, but that proud record always looked in doubt from the moment United took an eighth-minute lead.

Cristiano Ronaldo played a dangerous ball from the left into the Arsenal penalty area and young Gunners left-back Kieran Gibbs, who has deputized superbly for French international Gael Clichy in recent weeks, lost his footing -- allowing Ji-Sung Park to collect the ball and fire past goalkeeper Manuel Almunia.

The goal, the first Arsenal had conceded at home in Europe this season, justified manager Alex Ferguson's decision to select Park ahead of Carlos Tevez in the only change to the United side from last week's victory at Old Trafford.

Park's strike meant Arsenal now had to score three to reach the final, but their task was made even harder just three minutes later when Ronaldo's 40-yard free-kick deceived Almunia, who had kept Arsenal in contention in the first leg with a string of fine saves.

Despite the ferocity and brilliance of Ronaldo's long-range strike, Almunia appeared to misjudge the flight of the ball as it nestled into the left-hand corner of the net.

The second goal effectively killed off the contest, with 79 minutes remaining, and Arsenal were fortunate not to go three goals down on the night in the 17th minute when Almunia dived full-stretch to tip Wayne Rooney's superb curling effort around the post.

The half-time interval gave Arsenal some respite, but United looked far from finished as an attacking threat and could have extended their lead six minutes after the break when Ronaldo twisted and turned the Arsenal defense before firing a fierce shot that Almunia did well to turn around the post.

Arsenal pressed forward in search of a goal that would have given them some hope, but left themselves open to a United counter-attack and in the 61st minute the visitors added a devastating third.

An Arsenal corner was cleared and the ball found its way to the marauding Park, who found Rooney on the left. The England striker looked up before picking out Ronaldo who had burst into the box, and the Portuguese winger clinically despatched his finish into the top corner of the Arsenal net.

With the match over as a contest, Arsenal were now just playing for pride. Robin Van Persie's long-range shot stung the hands of fellow-Dutchman Edwin van der Sar in the United goal, while substitute Nicklas Bentdner fired into the side-netting after a promising run.

However, There was a late sting in the tail for United when midfielder Darren Fletcher tackled Cesc Fabregas in the penalty area.

The Scotsman appeared to take the ball but Italian referee Roberto Rosetti stunned United by pointing to the penalty spot before sending off Fletcher, meaning he will now miss the final.

Van Persie stepped up to convert the penalty, but it was scant consolation for a well-beaten Arsenal side, as United moved to within 90 minutes of winning a fourth European Cup and a possible showdown against Premier League rivals Chelsea in a repeat of last year's epic final in the Moscow rain.

"We got the lucky break by scoring the first goal," a delighted Ferguson told ITV Sport. "However, after that, I though our performance was terrific.

"It's just such a shame that Darren Fletcher will miss the final. He clearly took the ball and Mr Rosetti is one of the best referees in Europe, but he got that one wrong and unfortunately there is no appeal procedure."

Talking about the final, Ferguson added: "Barcelona's display against Real Madrid on Saturday had me drooling with admiration, but Barca have defensive problems and I just think Chelsea might be too strong for them on the night."