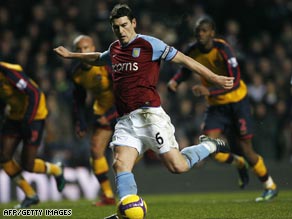 Barry, who made almost 400 appearances during his 12 years at Villa, finalised his big-money move to City after passing a medical.

Barry's contract at Villa Park was scheduled to expire at the end of next season when he could have walked away without a fee.

Villa confirmed earlier on Tuesday that the 28-year-old Barry had opened talks with City, who are owned by the Abu Dhabi United Group, over a switch to Eastlands.

Barry was linked with a transfer to Liverpool 12 months ago, but the deal collapsed when the Reds' failed to meet Villa's then $30m asking price.

Villa have now cashed in on their captain having failed in their bid for a Premier League top four finish that would have meant Champions League football next season.

Villa finished sixth in the Premier League this season and enter the inaugural Europa League while City manager Mark Hughes is seeking to mould a side that can break up the cosy top four of Manchester United, Liverpool, Chelsea and Arsenal.

City avoided the distraction of a place in Europe by finishing tenth and Barry is understood to have received assurances regarding the quality of player Hughes is looking to sign.

Barry will also be guaranteed regular first-team football at Eastlands -- a crucial factor in the build-up to the 2010 World Cup finals in South Africa.

Barry is currently preparing for the forthcoming qualifiers against Kazakhstan and Andorra and was keen to sort out his future before those matches on June 6 and 10.

Manchester United central defender Rio Ferdinand has been ruled out the Kazakhstan game with a recurrence of calf trouble, with Bolton's Gary Cahill called in as a replacement.

"I've had a good season and I've worked really hard. I've been in the provisional squad twice before and then this third time I was included once again, so I'm obviously delighted to get the call," said Cahill.

Cahill joins Matthew Upson and Joleon Lescott as the players vying for a place alongside skipper John Terry.