Japan became the first team to qualify for the World Cup finals in South Africa next year with a 1-0 win over Uzbekistan in Asian Group A on Saturday. 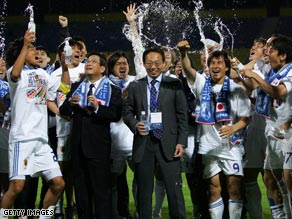 Japan players and management share a champagne moment after their 1-0 win.

Australia later drew 0-0 in Qatar to join them in the finals with two going through from each group.

South Korea then became the third Asian qualifier as the 2002 co-hosts won 2-0 in the United Arab Emirates to seal their place.

First half goals from Park Chu Young and Ki Sung Yueng lifted them to the top of Asian Group B on 14 points.

They are three points clear of North Korea, who drew 0-0 with Iran in Pyongyang on Saturday.

Japan owed their victory to Shinji Okazaki's ninth-minute goal in Tashkent to leave them on 14 points.

Australia joined them on the same points mark with a dogged display in Doha giving them four wins and two draws to qualify comfortably with two games still remaining.

The Socceroos have yet to concede a goal in the final phase of qualifying and were given few scares by the home side with Everton's Tim Cahill coming close to giving them all three points in the second half.

World Cup organizers sent a special message of congratulation to Japan, who for the second qualifying campaign in a row became the first team to seal their passage to the finals.