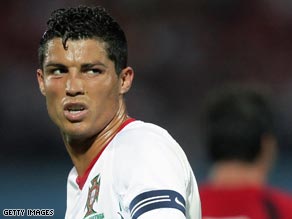 Ronaldo is set to smash the world record transfer fee if he agrees to move to Real Madrid.

The English champions have given the big-spending Spanish giants permission to talk to the World Player of the Year, according to the official United Web site.

United said on Thursday that the Portugal winger had again expressed his desire to leave Old Trafford, and the club now expect the deal to be concluded by June 30.

Madrid confirmed on the club's Web site that it hoped to seal an agreement with Ronaldo "in the coming days."

Real, who have fallen behind bitter rivals Barcelona, have swooped to follow up the $92 million signing of Brazil star Kaka from AC Milan earlier this week. What's your view? Tell us what you think about Ronaldo joining Real.

Real also held the previous record when they paid €77 million (now worth $108 million) for Zinedine Zidane in 2001.

The club's president Florentino Perez said after the Kaka deal was concluded that he would do "everything possible" to sign the 24-year-old Ronaldo, as he sought to build a new empire that would match his first stint at the Bernabeu.
The 20 most wanted players in the world.

United held off Real's advances last summer, with manager Alex Ferguson traveling to the Portugal camp during the Euro 2008 finals to hold crisis talks with Ronaldo.

The player committed himself to another season in Manchester, but was affected by injuries early on and -- despite a sizzling end to the campaign -- was unable to help United retain the UEFA Champions League title, losing to Barcelona in last month's final.

Perez is seeking to rebuild a team which finished second in the Primera Liga last season, nine points behind Barcelona, and again failed to progress past the first knockout stage of Europe's premier club competition.

He failed in his first bid for the presidency in 1995, but won the 2000 elections on a promise to sign Luis Figo from Barca.

Perez duly brought in the Portuguese forward and followed it up with a series of budget-busting transfers, including that of Zidane and David Beckham, as he created a team dubbed the "Galacticos."

Perez has also expressed an interest in bringing Ribery to Spain from Germany.

Ronaldo moved to Old Trafford in August 2003 in a $20 million transfer from Sporting Lisbon just days after scoring against United in a pre-season friendly.

He made his first senior outing for the national side that November and helped Manchester United win the FA Cup in May before suffering heartache as Portugal lost to underdogs Greece in the final of Euro 2004 on home soil.

He was vilified in England in the summer of 2006 after his antics helped get United clubmate Wayne Rooney sent off as Portugal progressed to the semi-finals of the World Cup in Germany.

After the tournament, Ronaldo revealed that he would like to leave United, but at the end of the 2006-07 season the forward agreed a new five-year contract.

Watch CNN on why Ronaldo moved »

The next campaign he beat George Best's 40-year-old club record for goals scored by a winger in a single season, with 33 in the Premier League and 42 overall.

Ronaldo suffered an ankle injury as Portugal lost 3-2 to Germany in the quarter-finals of Euro 2008, and told Portuguese newspaper Publico he would remain with United "for at least another year".

In December he was named Europe's top player, then the next month he escaped uninjured after writing off his Ferrari sports car when crashing into a roadside barrier under a tunnel near Manchester Airport on his way to training. Read about it here.

Ronaldo was named FIFA World Player of the Year on January 12 and went on to held United retain the Premier League title, but the club failed to become the first to retain the Champions League since its inception in 1992.