(CNN) -- Host nation South Africa suffered disappointment in the opening match of the Confederations Cup when they were held to a 0-0 draw by Iraq in front of nearly 60,000 fans at Ellis Park, Johannesburg. 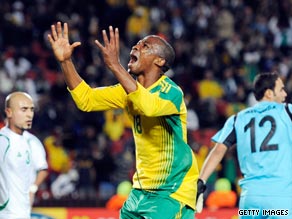 The Group A stalemate gives both nations a point apiece, two points behind group favorites Spain who thrashed New Zealand 5-0 later on Sunday.

South Africa had the better of the chances and Iraq had goalkeeper Mohammed Kassid to thank for keeping them in the match.

In the first half Kassid kept out midfielder MacBeth Sibaya's angled 20-meter drive with an athletic save, then he stopped Bernard Parker's long-range effort.

The chances continued for South Africa after the interval, with striker Thembinkosi Fanteni firing wide when in a good position.

Substitute Katlego Mashego then came on for Fanteni and the Orlando Pirates forward found himself with only Kassid to beat in the box, but the goalkeeper again did well to snuff out the danger.

South Africa wasted another gilt-edged opportunity with five minutes to go when Parker somehow contrived to miss the goal from close range.

Hosts South Africa will next face New Zealand on Wednesday with Iraq facing the Spaniards.