(CNN) -- Cristiano Ronaldo will be unveiled as a Real Madrid player on July 6, having finally agreed terms over his world-record $130 million transfer from Manchester United. 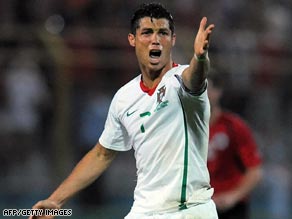 Cristiano Ronaldo is reportedly going to become the highest-paid player in the world at Real Madrid.

Spanish giants Real had been in talks with the 24-year-old World Player of the Year's representatives for the past two weeks after agreeing the fee with English champions United.

The Portugal winger will be tied to the Bernabeu until 2015, with Spanish media reporting that he will be paid €13 million ($18 million) each season.

Madrid announced on the club's official Web site read: "Real Madrid and Manchester United have signed a final agreement for the transfer of the rights of Cristiano Ronaldo from July 1.

"The player will be tied to Real Madrid for the next six seasons and will be presented on July 6 at the Santiago Bernabeu."
Who are the 20 most wanted footballers?

United also confirmed the deal on their Web site, stating: "Cristiano Ronaldo's departure is all but done and dusted after Real Madrid and Manchester United finalized the agreement for his transfer on Friday evening.

"The Portuguese winger was the subject of a world-record £80 million offer from the Spanish club on Thursday 11 June. He has since been on holiday but a return to work with new employers now beckons, with the sale set to be completed on Wednesday July 1."

When the deal is completed next week, it will be the fourth time Real have broken the world record for transfers.

President Florentino Perez smashed previous highest marks to bring Luis Figo and Zinedine Zidane to the Bernabeu in his first stint in charge, then made AC Milan's Brazilian superstar Kaka his first 'Galactico' capture of his second reign at the start of this month.

Perez is trying to rebuild a squad which fell well behind bitter rivals Barcelona last season, with the Catalans completing an unprecedented treble of titles culminating with victory in the Champions League final against United in May.

Ronaldo has reportedly admitted that he had already decided to join Real following United's capture of European football's premier prize with victory against English rivals Chelsea a year ago.

He will be the third new addition to the squad, with Valencia defender Raul Albiol due to sign a five-year deal next week after returning from Confederations Cup duty with Spain.

Real have been linked with a host of other players, including Albiol's club and international team-mate David Villa.