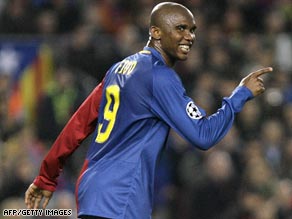 The 28-year-old, who has one year left on his contract with the Spanish and European champions, has long been linked with the Premier League club.

He has previously said that a move to City did not interest him, but the club's billionaire owner Sheikh Mansour Bin Zayed Al Nahyan is determined to finance a deal for the player, who scored 36 goals in Barca's treble-winning season.

Laporta believes that Eto'o will not be able to turn down such a huge pay package, despite being in negotiations over a new contract at the Nou Camp.
Who are the world's most wanted footballers?

"Eto'o has a stratospheric offer from City, which would convert him into the best paid player in the world," Laporta told Catalan radio station iCat FM.

"It's starting to become clear that he has this monster offer. He wants to stay but an offer like this is very difficult to refuse.

"If Eto'o accepts this stratospheric offer we will have to bring in someone."

The Eastlands outfit are also expected to sign Carlos Tevez from city rivals Manchester United after the Argentina forward decided not to accept a new contract with the Premier League champions.

United had agreed to pay the required $42 million to make Tevez's loan deal permanent, and also offered the player a five-year contract, but he opted to leave Old Trafford, saying he did not feel wanted by the club.

City hope that Eto'o and Tevez will link up with Brazil star Robinho, who was lured to Manchester from Real Madrid last August in a $58 million deal when he had appeared set to join Chelsea.

Eto'o has scored 125 goals in 184 games for Barcelona since joining from bitter rivals Real Madrid for €24 million (now worth $33.7 million) in 2004, having been on loan with Mallorca for the previous two seasons.