(CNN) -- Brazil have returned to the top of the FIFA world rankings after a two-year absence, following their Confederations Cup final victory over the United States in South Africa on Sunday -- FIFA.com have reported. 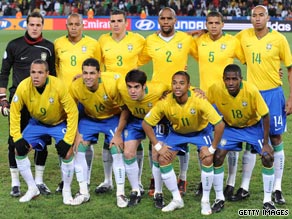 The Brazilian national side top the FIFA world rankings again after an absence of two years.

Dunga's side came from behind to defeat the United States 3-2, a result which sees them replace Spain after the European champions were beaten in the semifinals to finish third in the Confederations Cup.

Other changes in the top 10 see the Netherlands slip down a place into third while world champions Italy remain in fourth despite failing to make it past the first round in South Africa.

Of the other countries that took part in the Confederations Cup, the United States are up two places to 12th, Egypt are up two to 38th and hosts South Africa are also up two to 70th.

Meanwhile, disappointing performances from Iraq (94th, down 17) and New Zealand (100th, down 18) caused them to lose ground.