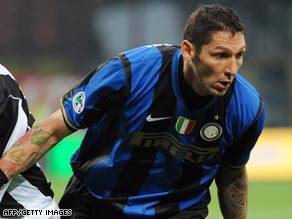 The 35-year-old World Cup winner's existing deal had been due to run out at the end of next summer, but he is now set to stay at the San Siro until 2012.

A statement on the Inter Web site read: ''FC Internazionale and Marco Materazzi announce the agreement for an extension which will bind the player to the club until 30 June 2012.''

The center-back has made almost 250 appearances for the Nerazzurri since joining Inter in 2001, winning four Serie A titles.

However, last season he was restricted to just 15 outings under new manager Jose Mourinho.

"I'll be Inter for life," he wrote on his official Web site, Goal.com reported on Thursday. "And it's not just a figure of speech. I could not have been more satisfied before leaving for my holidays -- I have extended my contract with Inter until 2012, hence until the end of my career.

"That's what I have always desired, since I am an Inter fan as much as I am one of their players.

"I will quit football wearing this shirt, and now I only want to try and win as much as we can both in Italy and in Europe. We'll see each other on July 10 for the start of the new season. I will be fired up."

Materazzi is still best known for his antics in the 2006 World Cup final, when his comments to Zinedine Zidane led to the France playmaker being sent off for a vicious headbutt in his farewell international which ended with the Italians being crowned world champions.

Meanwhile, Inter have also completed the signing of Genoa midfielder Thiago Motta on a four-year contract.

The 26-year-old, who resurrected his career last season after moving from Barcelona, has finalized a deal that was agreed earlier in the summer and also saw Argentine striker Diego Milito move to the San Siro on Tuesday.

Inter confirmed that midfielder Francesco Bolzoni, defender Leonardo Bonucci and striker Riccardo Meggiorini will join the Grifoni on a permanent basis in an overall package including the five players worth a reported $42 million.