Beckham: I'd consider a return to England

(CNN) -- Former Manchester United star David Beckham has surprisingly revealed that he would consider a return to the English Premier League. 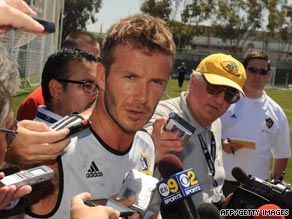 David Beckham faced a media scrum on his return to training with Los Angeles Galaxy.

The 34-year-old had previously insisted that he would never join a domestic rival of his old club, who he left in 2003 to sign for Spanish giants Real Madrid.

The midfielder then moved to the United States to team up with the Los Angeles Galaxy, and last season had a loan spell with Italy's AC Milan to keep alive his international career.

With Milan coach Carlo Ancelotti now in England as manager of Chelsea, Beckham has been linked with a return to his homeland.
What do you think? Should Beckham go to England?

"I would definitely consider it," said Beckham, who is determined to play at next year's World Cup finals in South Africa.

"Never say never. When I left United, I said I would never want to play for another English club. My heart was in Manchester, and I couldn't see myself wearing another shirt in the Premiership and playing against United. Now I wouldn't rule it out."

However, Beckham revealed that he still hoped to return to Milan at the end of the MLS season.

"Obviously Milan expressed that they want me to go back, so I don't see any reason why that would change," he said. "We'll have to wait and see. I hope to be going back there."

Beckham's stint with Milan caused a rift with his Galaxy teammate Landon Donovan, who questioned the former England captain's commitment to the club in a forthcoming book called "The Beckham Experiment" by Sports Illustrated writer Grant Wahl.

The duo have had clear-the-air talks since Beckham's return to training this week, having been on holiday following England's World Cup qualifiers last month.

Beckham also insisted that he will see out the rest of his five-year contract with the Galaxy, which expires in 2012 and allows him to spend the off-season with a European club.

"I intend to stay until the end of my contract and maybe further," he said. "I've always said that. I've always said, even when I went to Milan, that I'm committed to the Galaxy and to the MLS, and that hasn't changed."