By Timothy Abraham and Ben Wyatt
For CNN

LONDON, England (CNN) -- Manchester United and Liverpool fans dream of the arrival of superstar players ahead of a new campaign, but it seems the spending power of both Englsih giants could be on the wane. 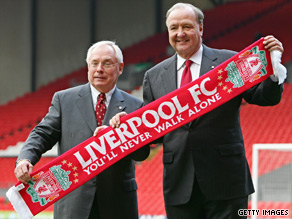 Both Rafa Benitez and Alex Ferguson have bemoaned the extravagance of the transfer market recently, with the United boss even going so far as to suggest he will not make anymore signings despite the transfer window remaining open until August 31.

This despite having recently recouped a world record fee of $130m for the sale of Cristiano Ronaldo from Old Trafford. So what are the reasons behind the new culture of prudence at the top of the English Premier League?

Well, it seems the cost of refinancing debt could significantly have curbed both clubs' spending power according to industry experts.

Financial prudence will be the watchword for the majority of the English Premier League in the transfer market as clubs look to consolidate their financial position in a move that could see a shift of power in Europe to Spain's La Liga.

It seems the Glazer family owners of United will not sanction anywhere near that amount of previous seasons for new players according to Professor Rogan Taylor at the University of Liverpool's Football Industry Group. How do you feel about United and Liverpool's debt situation? Sound Off below

The Americans' takeover of the Red Devils placed the club in $1.1 billion of debt, according to the holding companies' accounts of 2009; a situation that requires careful management.

"The refinancing at Manchester United is structured in a very complex way but ultimately the economic difficulties now mean that there will be a reduction in Alex Ferguson's transfer budget," he told CNN.

"Although some of the funds from the Ronaldo transfer will go back into the club's coffers there will be a tightening of the purse strings which will seriously impact on United's capacity to go after the top players.

"Certainly, Ferguson would have wanted a top-class replacement for Ronaldo but with the need to keep the debt in order and -- being unable to compete with Real Madrid and Manchester City -- the funds available and the pool of players from which they can sign is a lot smaller."

Liverpool's situation is even more acute as American co-owners George Gillett and Tom Hicks, through their company Kop Holdings, struggle to secure the finances to fund the club's proposed new stadium.

A deal to refinance their $570m Royal Bank of Scotland loan appears to have been secured, but the long-term sustainability of the idea used to purchase Liverpool is serious under question.

Professor Taylor added: "The whole model on which Hicks and Gillett bought Liverpool is flawed and Rafael Benitez may have to sell Javier Mascherano or Xabi Alonso before he can go out and spend during the close season.

"Even then there is no certainty he will get the whole amount from the sale of either of those players back in the transfer kitty so it promises to be a difficult period for Liverpool as obviously expectation has been raised following last season's second-place finish.

"The need to refinance the debt remains key to the American owners remaining in control of the club so that will be their priority -- at the expense of matters on the pitch."

Jon Keen deputy chairman of the Football Supporters Federation, and an expert in the field of club governance and ownership, admitted the situation at both clubs will stir up further resentment among fans towards their owners.

"The current refinancing situation in the top-flight is like a financial house cards which could come crashing down at any time," he told CNN.

"We have already seen a situation unravel with the banking system which has angered a lot of people and something similar could well happen with football in the near future.

"Ultimately fans want to see money raised from sales of players either put back into the transfer pot or levied against their own costs of attending matches, not simply servicing huge amounts of debt as is the case with Manchester United and Liverpool at the moment.

"There needs to be a reality check about the way these clubs are operating. Certainly, I think the current economic climate will drastically reduce the spending power of clubs in the Premier League with the exception perhaps of Manchester City."

Of course, this contrasts with Spain's Real Madrid who have recently splashed almost $300m on Ronaldo, Kaka and Karim Benzema -- and are not finished yet if president Florentino Perez is to be believed.

The construction magnate and his powerful board are able to wield influence with banks and allow Real to secure credit on favorable terms which, combined with a lucrative domestic television rights deal, puts them in a stronger financial position.

Ultimately this appears to have precipitated a shift away from the English Premier League to La Liga for the world's best players as Spain becomes the preferred destination of choice.

Whether Real can convert this into a challenge to the recent English domination of the UEFA Champions League on the pitch remains to be seen.