(CNN) -- Germany international midfielder Tim Borowski has rejoined Werder Bremen from Bayern Munich on a three-year contract, with the option of a further year at the Weserstadion. 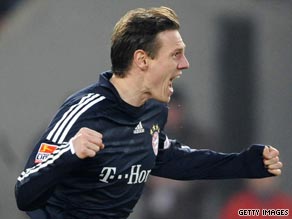 Tim Borowski had very few moments to celebrate during his only season with Bayern Munich.

The 29-year-old was brought to the Allianz Arena by then-coach Jurgen Klinsmann just a year ago -- but has failed to convince new coach Louis van Gaal of his worth.

"We are signing in Tim an experienced player, who will fit excellently into our young team," Bremen general manager Klaus Allofs told the club's official Web site.

"We know what we get with him, he has shown that over many years with Werder and we have found a solution which is satisfactory for both sides and Tim himself."

Bremen coach Thomas Schaaf added: "We are pleased that this transfer has gone through. We have already been able to celebrate some successes with 'Boro'. He knows the set-up at Bremen and I think that he is looking forward to joining us."

Borowski added: "I had a curious year at Bayern but don't want to miss this great experience. Now I am looking forward to Werder and want to start afresh there."