(CNN) -- Football's world governing body FIFA have fined the Ivory Coast Football Federation following the crush prior to their World Cup qualifier against Malawi in March that saw 22 supporters killed. 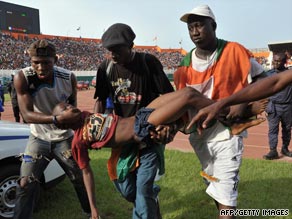 A young fan is carried away following the crush that saw 22 supporters lose their lives in Abidjan in March.

FIFA imposed a sanction of 50,000 Swiss francs ($46,800) and ordered Ivory Coast to limit the attendance of September's match against Burkina Faso to just 20,000 after concluding their inquiry into the tragedy at the Felix Houphouet-Boigny Stadium in Abidjan.

Apart from the fans who lost their lives, another 130 people were injured when a stampede occured 40 minutes before kick-off, amid reports that 36,000 supporters were trying to cram into a stadium which has a capacity of 34,600.

FIFA also announced a donation of $96,000 to a fund which has been set up to help the families of the victims.

As well as limiting the attendance for the Burkina Faso match, FIFA have imposed a mandatory traffic control cordon, which will be established at least 1km away from the stadium itself.

There will also be a spectator control cordon, established between 100 and 200 meters from the stadium, in order to filter the access of fans.

"In the event of any similar incidents, FIFA would have no choice but to impose more severe sanctions on the Ivorian Football Association," the organization said in a statement.

The Ivory Coast government has opened its own investigation into the tragedy.