(CNN) -- The U.S. President Barack Obama has urged FIFA, the governing body of world football, to give "strong consideration" to an American bid to host a World Cup in 2018 or 2022. 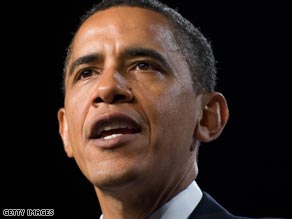 President Barack Obama is keen for America to host the World Cup in 2018.

The president spoke with FIFA head Sepp Blatter in a meeting at the White House on Monday and stated his belief that hosting the event may help to promote the profile of soccer in the United States.

Blatter said in a press conference that he has a duty to be impartial to all 11 contenders for the 2018 event -- but confirmed that Obama had appealed to him to "make another move toward United States soccer."

The last time the United States hosted the World Cup was in 1994 - when, despite limited appeal of football in the country, the tournament became the best attended in history.

Blatter gave the president several footballs as gifts and extended an invitation to the president, who has Kenyan roots, for the upcoming 2010 event in South Africa -- the first time the tournament will be held by the continent of Africa.

In turn The White House confirmed that Obama "hoped his schedule would allow him to complete the visit."

The president's press office went to say that Obama had "complimented FIFA on their efforts to incorporate community service, education and public health projects into their plans for staging the 2010 World Cup in South Africa."

Blatter, who played for nearly 20 years in his home nation of Switzerland, told a press conference that he had also been "impressed" by Obama's skills when the two kicked a ball between one another.