(CNN) -- The start of the Argentina league football season has been indefinitely delayed while a solution is sought for the debt crisis which is crippling the leading clubs. 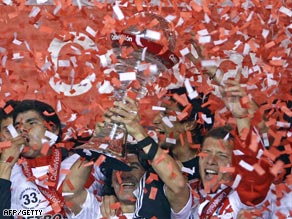 River Plate celebrate winning the 2008 Clausura but are reportedly one of the clubs with the biggest debts.

The opening fixtures in the Apertura were due to take place on August 14 until football chiefs of the South American powerhouse stepped in.

"The executive committee of the AFA (Argentina Football Association) resolved unanimously tonight that the championships in all categories should not start on the scheduled dates," a statement read on their official Web site www.afa.org.ar.

The announcement came after desperate efforts by long-time AFA president Julio Grondona to secure more financing came to nothing.

Grondona has been negotiating with television companies to increase the amount of money paid for the rights to air the action and also wants the government to relax a ban on Internet betting.

A combination of the global financial downturn and less money coming in transfer fees from top European clubs to purchase home grown Argentina stars has contributed to the crisis.

The Argentine league is considered the strongest in South America and one of the best in the world.

Estudiantes recently claimed the Copa Libertadores, the South American equivalent of the Champions League, but other leading clubs such as River Plate, who have won a record 33 Argentina league titles, San Lorenzo and Independiente are reported to be the heaviest in debt.

The Argentine league season is in two parts, with the opening championship or Apertura, running from August to December, and the Clausura, won by Velez Sarsfeld this year, taking place from February to June.

The AFA said Wednesday that participation by Argentine clubs in the upcoming Copa Sudamericana would not be affected or the national team's friendly match next week against Russia, but gave no date for when the Apertura might begin.