(CNN) -- Chelsea have won the Community Shield -- the traditional curtain-raiser to the start of the English Premier League season -- beating Manchester United 4-1 on penalties at Wembley after the teams drew 2-2 after 90 minutes. 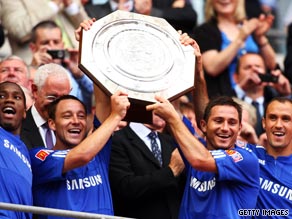 Chelsea collect the Community Shield after defeating Manchester United on penalties at Wembley.

The London side scored all four of their spot-kicks, while veteran midfielder Ryan Giggs and French left-back Patrice Evra both missed their penalties for United.

Earlier, the trophy, played for between the league champions and FA Cup winners of the previous season, looked to be heading Chelsea's way in regulation time until Wayne Rooney scored a last-gasp equalizer for United.

Rooney slotted the ball past goalkeeper Peter Cech, after Giggs played a superb through-ball that found the England striker marginally in an on-side position.

A competitive match saw Chelsea nearly take the lead in the fifth minute when defender Branislav Ivanovic fired towards goal from a corner only for Evra, who was guarding the far post, to head his shot up onto the crossbar.

United then took the lead just five minutes later with their first serious attempt on goal. Portuguese winger Nani, who has struggled to establish himself in the United first team, cut inside from the left-wing and struck a shot from outside the area that seemed to go through Cech's hands.

They nearly doubled that lead six minutes later when Rooney's header back across goal found Ji-sung Park, whose shot from close-range was saved by Cech.

The Czech Republic goalkeeper then produced a superb one-armed stop to deny Dimitar Berbatov while he also tipped a Darren Fletcher striker over the crossbar.

But Chelsea came back into things after the break -- and they levelled in the 52nd minute when defender Ricardo Carvalho, who nearly joined Inter Milan in the summer, headed home at the far post after Florent Malouda's cross was punched straight to him by United goalkeeper Ben Foster.

Chelsea were now in control and they took a 69th minute lead -- although there was an element of controversy about the goal.

Michael Ballack appeared to body-check Evra off-the-ball but the referee waved play-on as United had possession. However, they lost the ball and, with Evra down holding his face, Chelsea played on and Lampard eventually fired in Didier Drogba's left-wing cross, although Foster got both hands to the shot.

That looked to be enough to give Chelsea victory, although Rooney's last-gasp intervention meant they had to wait a bit longer before eventually winning the shield on penalties.

"He (Ballack) clearly elbowed him in the face. I'm disappointed because the ref stopped the game twice before that for fouls, when Ballack was lying on his back. That incident cost us the game. There's no question it's a grey area."