Chelsea fight back to defeat Sunderland

(CNN) -- Chelsea made it two English Premier League wins out of two matches after once again fighting back from conceding the opening goal to win 3-1 at Sunderland. 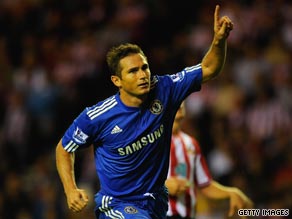 Lampard celebrates scoring from the penalty spot as Chelsea fought back to defeat Sunderland 3-1.

The London side needed a late Didier Drogba goal to beat Hull on Saturday, after the visitors had gone ahead, and the same thing happened on Tuesday when new signing Darren Bent put Sunderland ahead with his second goal in consecutive games after Kenwyne Jones' shot was blocked.

Chelsea levelled seven minutes into the second-half when Frank Lampard's corner took a touch at the near post and Michael Ballack forced the ball home at the back post.

Sunderland fell behind in the 61st minute when George McCartney fouled Drogba in the penalty area and Lampard drilled home the spot-kick.

Chelsea sealed the three points when Deco eluded substitute Grant Leadbitter to angle home a right-foot shot from 20 yards out.

In the evening's other Premier League match, newcomers Wolves recovered from their opening day home defeat by West Ham to win 1-0 at Wigan -- who had beaten Aston Villa 2-0 in their first match.

The only goal came in the sixth minute when Irish forward Andy Keogh rose highest to head home a Nenad Milijas free-kick.