(CNN) -- A late goal from Pedro Rodriguez, with just five minutes remaining of extra time, gave Barcelona a 1-0 victory over Shakhtar Donetsk in the European Super Cup final in Monaco on Friday. 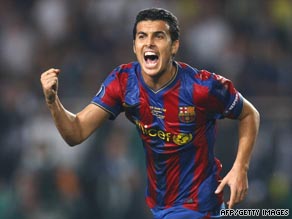 The annual match between the winners of the Champions League and UEFA Cup, have rarely been classics and this was no exception on a poor quality pitch at the Stade Louis II stadium.

Shakhtar did not create a single opening in normal time while Barca at least showed some intent in a match of few chances.

Thierry Henry has a snapshot that flew just over the crossbar while a quick free-kick from Xavi saw Lionel Messi sting the fingers of Andriy Pyatov in the Shakhtar goal -- and the keeper recovered quickly to deny the lurking Henry.

If the first half had been disappointing, there was little to lift spirits in the second. Messi hit a fierce left-foot effort that Pyatov could only parry, and when the ball drifted out to Henry by the left touchline he took deliberate aim to loop a shot into the far corner but the Shakhtar keeper climbed just high enough to turn it over.

In the 98th minute, Victor Valdes made his first save, diving low to keep out Julius Aghahowa's goal-bound shot.

Bojan Krkic, on for Henry, could have wrapped it up with two chances before, having barely threatened, the Ukrainians were denied a blatant penalty when Ilsinho was felled.

Shakhtar coach Mircea Luscescu stormed onto the pitch in fury but it was all in vain as Messi's brilliant pass set up Rodriguez for the latest of winners.