(CNN) -- Liverpool have secured the biggest sponsorship deal in the English Premier League club's history after they announced a four-year deal with Standard Chartered Bank. 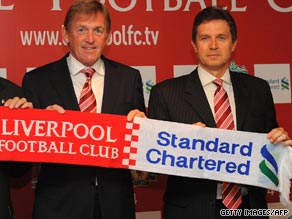 The Reds have confirmed that the bank will replace current sponsors Carlsberg at the start of the 2010-11 season, ending a 17-year association with the Reds, for the beer maker.

The figure for the sponsorship has not be disclosed but reports in British newspaper The Guardian suggest the deal is worth $133 million.

Liverpool managing director Christian Purslow spoke of his delight on sealing the sponsorship agreement for the Anfield-based side.

"I am tremendously excited - it's a hugely important day in the history of Liverpool FC," he told the club's official Web site.

"This is the largest commercial agreement we have ever entered into. To have attracted a partner of the caliber of Standard Chartered Bank says everything about where we are trying to take this football club.

"They operate in a number of markets around the world where we have a long term plan to increase the family of Liverpool fans and this agreement will be very helpful to us in doing that."

Purslow added: "Many branches in these countries will effectively be a shop window for Liverpool FC and a means of attracting more supporters to the cause.

"We aspire to be the best at what we do on and off the field. This is the first commercial agreement the club has entered into which can truly be described as the best of its kind in world football.

"I hope this tells everyone, especially our fans, what we are trying to do with this football club in the future."

The move follows Liverpool's American owners, George Gillett and Tom Hicks, concluding a deal in July to re-finance a $380 million bank loan they took out to buy the club in 2007.

Plans to develop a new 60,000-seater stadium at a cost of $580 million were shelved due to the recession in 2008 by the club, despite planning permission being granted by the local city council.