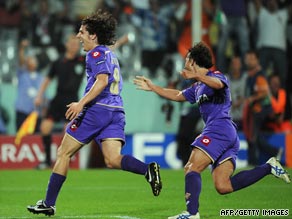 It was Liverpool's first away defeat in Europe since the semifinal loss at Chelsea in April 2008, and only their ninth away reverse in 38 attempts under manager Rafael Benitez.

The home side took the lead in the 27th minute when Cristiano Zanetti's through-ball found Jovetic running from an on-side position -- and the 19-year-old was allowed to close in on Jose Reina before guiding the ball past the goalkeeper.

Fiorentina doubled their advantage 10 minutes later when Marco Marchionni crossed from the right and the ball found Juan Manuel Vargas on the left -- and his low shot to the near-post was deflected past Reina by Jovetic.

In the other group match, Lyon made it two wins out of two, to go top of the group, after a comfortable 4-0 victory at Hungarian champions Debrecen.

Kim Kallstrom opened the scoring in the third minute with a half-volley from the edge of the penalty area and teenage Bosnian Miralem Pjanic doubled Lyon's advantage 10 minutes later with a sweetly struck 25-yard free-kick.

Sidney Govou then put the game beyond the hosts with a header from a Pjanic corner that glanced off Peter Czvitkovics's arm before nestling in the bottom-right corner.

Bafetimbi Gomis lobbed in the fourth after heading the ball past Debrecen goalkeeper Vukasin Poleksic early in the second half, as Lyon established a three-point lead over Liverpool and Fiorentina at the top of the group.

Meanwhile, Group H favorites Arsenal top the table with six points from two matches after a comfortable 2-0 home win over Olympaikos, who remain second in the table.

Arsenal dominated possession and missed a host of first-half chances with veteran Greek goalkeeper Antonis Nikopolidis standing firm. The 38-year-old Nikopolidis was beaten only once, but Cesc Fabregas' half-volley thundered back off the crossbar.

The Gunners eventually found the breakthrough with 12 minutes to go when a superb Fabregas through-ball found substitute Eduardo on the left and his cross was comfortably turned home by Robin van Persie from close range.

Playmaker Andrey Arshavin added the second goal with four minutes remaining with a cheeky back-heel, although the Russian certainly appeared to be in an off-side position when scoring.

The other group match ended in a draw, as Standard Liege substitute Moussa Traore scored a last-gasp equalizer to earn the Belgian side a 1-1 draw with Dutch champions AZ Alkmaar.