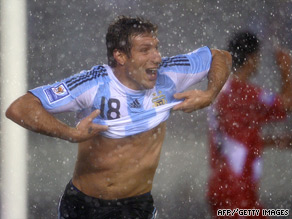 Palermo celebrates his dramatic last-gasp goal to give Argentina a vital 2-1 victory over Peru.

Palermo, whom Maradona recalled to the side after a 10-year absence, tapped home at the far post in driving rain to send his coach diving across the sodden turf in celebration.

Hernan Rengifo had headed an equalizer for Peru in the 90th minute to cancel out debutant Gonzalo Higuain's opener early in the second half.

The win moved Argentina up to fourth place in the South American qualifying table, a point ahead of Uruguay, whom they play on Wednesday, and two clear of Ecuador.

Maradona sprung a surprise with his team selection, leaving big-name strikers Carlos Tevez and Sergio Aguero on the bench and instead handing Higuain his first cap.

Argentina went into the match having lost their last three qualifiers to Paraguay, Brazil and Ecuador, but if ever there was a chance to restore some confidence in the side this was it -- a home match against the team bottom of the group.

Argentina took the lead in the 48th minute, Pablo Aimar stabbing a pass through into the right of the area, which Higuain ran onto and slotted into the far corner.

But they began to grow more nervous as the second half wore on, their chances drying up as torrential rain started to pour down.

Argentina seemed prepared to hold out for the final whistle and were made to pay when they conceded in the final minute.

Moments after keeper Sergio Romero had made a superb point-blank save, Rengifo nodded home a cross from the left from barely two yards to bring Peru level.

But just as Argentina's World Cup dreams looked to be slipping away, Palermo came up trumps for his under-fire coach.

With no fewer than eight Argentinian players in a packed Peru penalty area, the Boca Juniors striker found himself in the right place at the right time to convert the easiest of chances after a low ball across the box came all the way through to him.

There was more drama to come as Peru's Rainer Torres tried his luck straight from the kick-off, but his effort struck the bar and Argentina and Maradona claimed a vital win.

Meanwhile, Chile became the third team from South America to secure World Cup qualification with a thumping 4-2 victory away to Colombia in Medellin.

Midfielder Jorge Valdivia was the star of the show as he came off the bench to score one goal and help create the other three.

Fabian Orellana scored twice with Waldo Ponce also on target for Chile, who had to come from behind after Arturo Vidal's own goal gave the home side the lead.

Giovanni Moreno scored a second for Colombia, but their hopes of making it to South Africa are over.

The victory lifted Chile five points clear of fourth-placed Argentina in the standings with just one game to play. It will be Chile's first appearance at the tournament since 1998.

Already-qualified Paraguay showed no mercy to Venezuela as they won 2-1 in Puerto Ordaz to move level on points with Brazil at the top of the table.

Second-half goals from Salvador Cabanas and Oscar Cardozo put the Guaranies in command before Salomon Rondon halved the deficit for Venezuela, for whom Nicolas Fedor missed a penalty.

The defeat ends Venezuela's hopes of being in South Africa.

Meanwhile, Uruguay claimed a crucial 2-1 victory away to Ecuador to keep their hopes of qualification alive going into the final round of fixtures.

An injury-time penalty from Diego Forlan gave the Charruas victory at the Olimpico Atahualpa and they now need a win over Argentina on Wednesday to achieve automatic qualification.

Antonio Valencia had put the home side ahead in the second half only for Luis Suarez to equalize for Uruguay almost immediately.

Ecuador must now beat Chile on Wednesday to make sure of a play-off place against a country from North, Central America and Caribbean qualifying. The Uruguayans, meanwhile, will make it to the World Cup if they beat Argentina.