(CNN) -- Some of the world's top footballers remained eligible -- barely -- to compete in next year's World Cup after tense matches late Wednesday in Europe and South America. 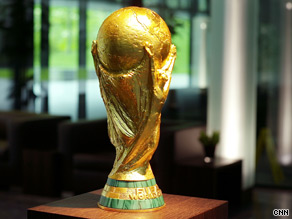 The ultimate prize -- 32 teams will be bidding to raise the trophy in South Africa next year.

Top of the list is playmaker extraordinaire Lionel Messi, whose national team Argentina scraped a 1-0 win against Uruguay in Montevideo to secure the fourth automatic place from the South American group.

Fifth-placed Uruguay now face a November playoff against Costa Rica, the fourth-placed team from the CONCACAF group, to secure a spot in South Africa next year.

Portugal's Cristiano Ronaldo will also be hoping his team can qualify via the playoffs after they beat Malta 4-0 on Wednesday to seal second place in their European qualifying group.

With teams competing all around the world to ensure they will be in the hat when the draw is made in Cape Town on December 4, CNN gives you the lowdown on the current state of play following Wednesday's matches:

In the South American zone, all the attention was on whether Diego Maradona's Argentina would have missed their first finals since 1970. Is it still worth watching the World Cup if the stars are absent? Send us your views

Substitute Mario Bolatti scored in the 85th minute to give Argentina a 1-0 victory against Uruguay on Wednesday night and send the struggling South American football heavyweights through to next year's World Cup. Read more on the match

Argentina had lost four straight games away from home before Wednesday's game in Montevideo.

England, Netherlands and European champions Spain secured three of the nine automatic places on offer in September, and were joined on Saturday by three-times winners Germany, defending champions Italy, Denmark and Serbia.

Group Two winners Switzerland reached their second straight World Cup finals on Wednesday after a 0-0 home draw with Israel, while Greece are in the playoffs after defeating Luxembourg 2-1.

Meanwhile in Group Three, Slovakia beat Poland 1-0 in snowy conditions to qualify for the first time, with Slovenia taking second after their expected victory over a poor San Marino.

In Group Six, Ukraine beat Andorra to earn a playoff spot, while Group Nine runners-up Norway are the only second-placed team to fail to reach the playoffs.

Costa Rica missed out on automatic qualification after the United States salvaged a 2-2 draw with a stoppage-time goal. Costa Rica finished with the same number of points in the group stage as Honduras, but were relegated to fourth place and a November playoff against Uruguay based on goal differential.

Elsewhere, Mexico finished second, a point behind the U.S., after also drawing 2-2 in their final match against Trinidad and Tobago.

Ghana were the first country from Africa to clinch qualification, comfortably winning their group last month with two matches still to play, while the Ivory Coast joined them to leave three other places still up for grabs for the next round of qualifiers in November.

The four automatic places have been taken by Australia, Japan and North and South Korea, while Bahrain face a play-off against Oceania group winners New Zealand for the zones' remaining finals spot.