(CNN) -- Substitute Mario Bolatti scored in the 85th minute to give Argentina a 1-0 victory against 10-man Uruguay on Wednesday night and send the struggling South American football heavyweights through to next year's World Cup finals. 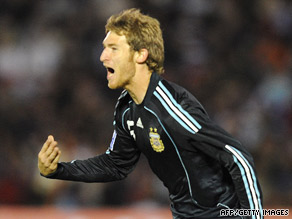 Mario Bolatti rejoices after scoring the decisive goal that sent Argentina into next year's World Cup.

Uruguay finished fifth in the group and now face a playoff in November against Costa Rica to secure a place in the South African showpiece.

Argentina's bid to qualify went to the final game of group-stage qualification, raising the prospect that one of the game's best players, Lionel Messi, would not play in football's greatest event and that coach Diego Maradona would end his brief tenure.

The decisive moment came late in the match in Montevideo, as home defender Jose Martin Caceres was sent off for a foul against winger Jonas Gutierrez, reducing Uruguay to 10 men.

From the ensuing free-kick, Messi shifted the ball left to Juan Sebastian Veron, whose long-range shot ended up falling to Bolatti -- on the field for just four minutes -- who reacted quickest and fired past goalkeeper Nestor Muslera for the winner.

Maradona was delighted after the victory, Argentina's first in the Uruguayan capital in 33 years, and celebrated wildly on the pitch after the match.
Argentina fans revel in qualifying win.

"I can't say I enjoyed the game because I was aware throughout of how strong Uruguay were," he told FIFA's official Web site.

"I'd like to thank the players from the bottom of my heart because today was the day they made me a coach. I'd also like to dedicate our qualification to the people of Argentina, my family and to nobody else."

Uruguay go into the playoffs for the third successive time, having failed to qualify for Germany in 2006 after reaching the 2002 finals in Japan and South Korea, where they failed to go past the first-round group stage.

It was Venezuela's first-ever point on Brazilian soil, and the fourth time the group winners -- who had Miranda sent off for an elbow on Giancarlo Maldonado in the 56th minute -- were held to a goalless draw at home in this campaign.

Ecuador's bid to qualify ended in a 1-0 defeat in Santiago by Chile, who pipped Paraguay for second place on goal difference as Humberto Suazo netted his 10th goal of the qualifiers to be the zone's top scorer.

Paraguay could have topped the group but lost 2-0 at home to Colombia, with Gustavo Ramos and Hugo Rodallega scoring in the second half.

Peru finished bottom despite beating fellow strugglers Bolivia 1-0 in Lima, thanks to a 53rd-minute winner from Johan Fano, who was given a straight red card soon after.

Bolivia had already been reduced to 10 men, with Rosauro Rivero sent off for a second yellow card in the 39th minute.