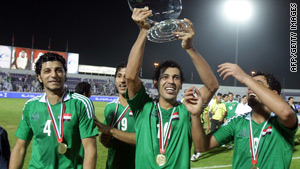 Baghdad, Iraq (CNN) -- The Iraqi Olympic Committee said Saturday it stands by its decision to disband the country's soccer association -- a move that led to the association's suspension from international football.

World governing body FIFA said Friday it had decided to suspend the Iraqi Football Association (IFA) because of the Iraqi Olympic Committee's move to disband it. FIFA described that as governmental interference.

The suspension means Iraqi soccer clubs and teams may not play in international matches or receive financial assistance, though FIFA made an exception for Iraqi female players to play in a weeklong under-16 regional football festival in Jordan starting Sunday.

FIFA said it learned Monday that the Iraqi Olympic Committee had disbanded the IFA and that governmental security forces had seized control of the IFA headquarters.

FIFA officials gave the committee 72 hours to revoke the decision and hand the headquarters back to the IFA.

"The deadline has expired without revocation of the decision by the Iraqi Olympic Committee and the IFA has not been restored to its headquarters," FIFA said in a statement Friday.

"The FIFA Emergency Committee has therefore decided to immediately suspend the IFA until the decision of the Iraqi Olympic Committee is revoked and the IFA retakes possession of its offices."

The Iraqi Olympic Committee's actions are in "total contradiction" to FIFA statutes, which require national teams to have full independence, FIFA said.

Two top Iraqi officials said Saturday the decision to disband the IFA was based on financial and administrative irregularities and violations, and that they were not surprised by FIFA's decision and had expected it.

Samir al-Moussawi, a senior member of the Iraqi Olympic Committee, told CNN he was hopeful the issue could be resolved with FIFA in the coming days, and that the Olympic committee had international lawyers working on the issue.

He denied, however, that government security forces had seized IFA headquarters, saying the men were protection services personnel guarding the building.

Ali al-Dabbagh, the Iraqi government spokesman who has been delegated for months to deal with the International Olympic Committee, told CNN he will work on cooperating with FIFA's demands and holding transparent IFA elections.

He said the suspension "will not have a major effect" on Iraqi football because the national team has no international matches scheduled over the next six months.

It is the second time FIFA has suspended Iraqi football. The first time was in May last year, after the Iraqi government dissolved the national Olympic committee and all national sports federations.

FIFA lifted the ban after the Iraqi government excluded the IFA from dissolution.

Iraqi soccer has come a long way since the days of Saddam Hussein, when Hussein's son, Uday, was president of the Iraqi Olympic Committee and regularly threatened players with physical violence and torture if they played poorly.

The national soccer team has continued playing, however, and has been viewed as something that has united Iraqis across sectarian lines.

Although Iraq has not qualified for next year's World Cup in South Africa, the national team was able to celebrate becoming the Asia champions in 2007.

In July, Iraq played its first home game since 2002, beating its Palestinian opponents 4-0. Tens of thousands attended the match in the capital after FIFA lifted its ban on international games in Iraq.