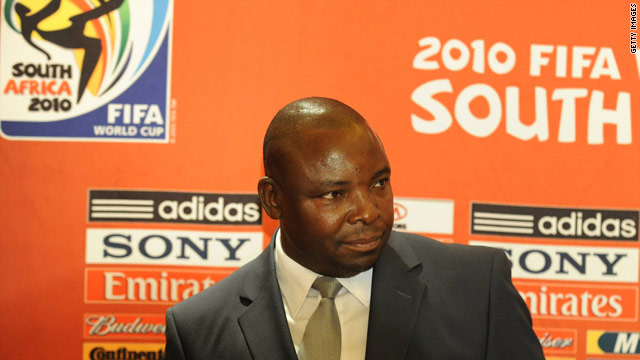 (CNN) -- While the football community is gearing up for next week's World Cup draw in Cape Town, the globe's most popular game is embroiled in match-fixing scandals on two continents.

European ruling body UEFA has revealed that five clubs and three referees are under separate investigations following the swoop by German police last week that saw 15 people arrested in a bid to break a betting ring.

World Cup hosts South Africa have also announced that the investigation into alleged corruption of match officials in the country's domestic league will be extended following new revelations coming to light.

Ace Ncobo, the former General Manager of the Premier Soccer League, made damning comments about corruption in the South African game at the weekend following his resignation.

"When an official who served the league in a senior position is quoted in the media as saying the league is rotten to the core, and that he is in possession of a dossier to prove that, it compels us as a responsible association to demand that information in order to help us in our investigations," the SAFA said in a statement.

"We have written letters to Ncobo and the league requesting them to furnish us with information that might assist us in our investigation."

UEFA has named Albania's KF Tirana and KS Vllaznia, Latvia's FC Dinaburg, Slovenia's NK IB Ljubljana and Budapest Honved FC of Hungary as the clubs it is further probing due to "suspicious results" in a Champions League qualifier and early-round matches in the second-tier Europa League.

It had earlier announced that "around 40 fixtures in Europe were considered suspicious in terms of results."

For the sake of progress and our resolve to clean up the game, nothing will be swept under the carpet
--SAFA President Kirsten Nematandani

"Irrespective of the above matches, UEFA is opening its own investigation into the possible involvement of three referees and another individual connected to UEFA, in the match-fixing," the ruling body said in a statement.

"Contrary to reports there is no suspicion or investigation into any UEFA administration staff. UEFA will file criminal complaints, together with the relevant national associations, as soon as possible against clubs, officials and/or players in those countries concerned.

"We have full trust in our national associations to deal with the cases related to their national competitions and will continue to provide them with our co-operation."

SAFA President Kirsten Nematandani insists that his organization is determined to clean up football in South Africa.

"The association has a responsibility to its sponsors, government and most importantly, to the players," he said on its official Web site.

"We have initiated an investigation on this matter relating to referees, and already we have effected suspensions and in some instances demotions. This is a sign that we will act without failure upon receiving a final report from Judge Mushwana.

"For the sake of progress and our resolve to clean up the game, nothing will be swept under the carpet."