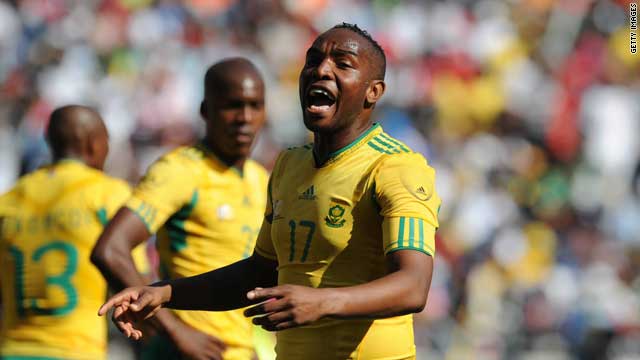 (CNN) -- As hosts of the largest carnival in world football, the pressure is on for South Africa's national football team to ignite the imagination of local fans by performing well at the 2010 World Cup.

If Bafana Bafana is to succeed in their mission, conventional wisdom would be that coach Carlos Alberto Parreira will turn to his best players to deliver results.

However, despite firing in 31 goals in 77 appearances to become South Africa's all-time record goal scorer, Benni McCarthy has had question marks hanging over his participation for his country come June.

The prolific striker, who plays for English Premier League side Blackburn Rovers, has only recently returned from a period of international exile, just the latest incident in a stormy history with his country's football team.

He first angered Bafana Bafana fans by going into international retirement in 2002 aged just 25. The reason? Traveling to international games was hampering his ability to play European football for Celta Vigo and, later, Porto.

"The whole pattern was killing my career, that's why I quit international football," he told British newspaper The Independent in 2004. "African football needs the same calendar as Europe otherwise its best players are going to suffer."

He was talked into returning, only to quit again after the 2006 Africa Cup of Nations when the president of the South African FA, Mubarak Mahomad, made an uncomplimentary comment about his performance.

That period of self-imposed exile lasted 20 months, until new coach Carlos Alberto Parreira flew to Great Britain to talk to McCarthy, who was now at Blackburn Rovers. But after Parreira quit to care for his sick wife, McCarthy fell out with replacement boss Joel Santana after he refused to play in two warm up matches last March.

Despite pleas from South African President Jacob Zuma, Santana refused to pick him. But a run of eight defeats in nine games, which saw the team slump to 86th on the FIFA rankings, Santana was sacked. With goals being South Africa's biggest problem, it was no surprise that returning coach Parreira made persuading McCarthy to return, for a second time, his top priority.

Sure enough, McCarthy returned to the fray last month against Japan. The 32-year-old told local press: "I want to start afresh and help Bafana do well in the World Cup finals. It is every player's dream to play for his country... and I have matured."

"In the past I was a loose cannon and I apologize if I was wrong [but] I am still the best at what I do - and that is scoring goals," he added.

Few could argue with McCarthy's record. Born in Hanover Park, an impoverished township in Cape Town known for its high unemployment, poverty and gang-related violence, McCarthy escaped to become one of Africa's most successful football exports.

McCarthy started his career in 1995 aged 18 with Seven Stars of Cape Town, where 27 goals in 29 games earned him a move to Cape Town Spurs who soon merged with Ajax Cape Town, a feeder side to their famous Dutch namesake.

McCarthy's potential was enough for Ajax Amsterdam to sign him. Joining in 1997 he scored nine goals to help them win the Eredivisie in his first year, which eventually attracted the attentions of Spain's Celta Vigo.

Although it didn't work out in Spain, his move to Portugal's FC Porto was a roaring success. In the 2003/04 season he helped Jose Mourinho's side win the UEFA Champions League with McCarthy memorably grabbing two goals in the second round defeat of Manchester United.

McCarthy moved to Premier League outfit Blackburn Rovers in 2006 and scored plenty of goals - he was in the top three league scorers in his debut season - but first-team opportunities have been limited of late.

Yet ever since McCarthy made his international debut in a 2-0 home defeat to Holland 1997, South Africa has been a different side with him in it. Gloom has followed South Africa's footballing exploits before this summer's World Cup. But after his most recent 'comeback', Bafana Bafana fans will hope that McCarthy can help put the dark days under Joel Santana firmly behind them.

Hear what Benni has to say in CNN's coverage of the World Cup draw, live on Friday 4th December.