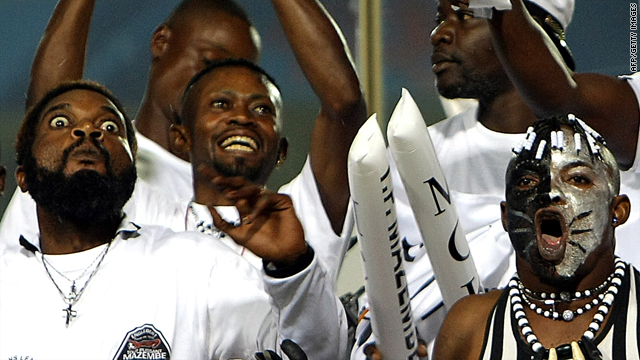 There are arguably few fixtures in international club football that come as obscure as the match up between the surprise champions of Africa and Oceania's amateur representatives. In the hierarchy of the game, the match-up will barely register a second look amongst the sport's elite.

But the match holds huge significance, not just in both of the respective countries, but by also performing an invaluable service for world football: giving a much needed leg-up to football's outsiders.

The tournament has long been seen as an inconvenience to the fans of the top European teams, thanks to the fact that it falls in the middle of the domestic season. The schedules have been tweaked accordingly: Barcelona will be parachuted in for the semi-finals, needing only two games to win the title.

Yet for the poorer teams from far-flung confederations, the Club World Cup offers those on the fringes a chance to shine against some of the world's top clubs and earn prize money that would take decades to earn in their home continents.

"New Zealand qualified for the World Cup, now we've won our first game at the Club World Cup so it has been a great year for New Zealand football," said Auckland City FC goalkeeper Jason Spoonley after his team beat Dubai's Al Ahli in their first round match, an amazing feat for a club that doesn't have a single professional player.

The victory followed New Zealand's two-leg intercontinental play-off against Bahrain, which saw the All Whites qualify for South Africa 2010. For Spoonley, who was in the All Whites' squad, both that qualification and the Club World Cup victory gives football in New Zealand, a country dominated by rugby, a huge lift back home. More importantly, it gives the players a chance to show off their skills to European scouts.

"This tournament gives us amazing exposure that millions of players would die for. I've just heard a couple of rumors that some of the boys were being looked at by Spanish La Liga clubs," he said.

But the largest impact comes from the sheer scale of the money involved. For winning the O-League, the Oceania Champions League, Auckland City FC received nothing. The total prize pot in Abu Dhabi, however, is $16.5 million. Even coming last guarantees $500,000, but their heroics against Al Ahli, followed by a tough 3-0 defeat to Mexico's Atlante, means they will now pocket at least $1million, even if they lose to TP Mazembe.

"The money allows us a bit more freedom. It means I can travel for trials abroad which can be expensive," explained Spoonley, who splits his time playing for Auckland and studying for a joint honors law and political science degree. "It is a fantastic relief for amateur clubs."

Football is a huge factor for development in Africa, in Congo especially. People love football so much, it unifies even in times of war.
--Congolese midfielder Tresor Mputu

TP Mazembe have also overcome large obstacles to get to Abu Dhabi. When the team broke North Africa's recent dominance to win the African Champions League this year, it marked the return of Congolese (DR) football to the top of the African game.

More than 40 years ago they were considered one of the best teams on the continent reaching four Champions League finals between 1967 and 1970 and winning two of them. But two brutal wars, the second of which took more lives than any conflict since World War Two, an estimated 5.4 million according to a 2008 International Rescue Committee mortality survey, destroyed almost every aspect of civil society and decimated its sporting infrastructure.

"There were many times my life was at risk, it was a difficult time. With the end of the war I am happy that there is now peace," said Tresor Mputu, the side's captain who is currently considered one of the best players in Africa following a nomination for the 2009 BBC African Player of the Year and finishing top scorer in the African Champions League in 2007 and 2008.

TP Mazembe will benefit handsomely from their appearance in Abu Dhabi, even after narrowly losing to South Korea's Pohang Steelers 2-1. The prize money for winning the African Champions League is $950,000. In comparison a win on Wednesday, which will secure fifth place, will clinch the Congolese side $1.5 million. Yet the attack-minded midfielder sees the team's international success as more than just the pursuit of footballing glory and financial gain.

"Football is a huge factor for development in Africa, in DR Congo especially," he said. "People love football so much, it unifies even in times of war. Winning is so important. To win, win, win all the time can only be a good thing. The greatest feeling was in the [African] Champions League, to be united in the football stadium to see all the fans come to support."

The stadium on Wednesday night might well only contain a smattering of truly die-hard football fans, and few in Europe will care who comes fifth and sixth in a minor footnote on the international football calendar. But for millions of fans in Congo and New Zealand, not to mention those that will aspire to take their places next year, Wednesday night will be anything but an irrelevance.

"It has been the dream of my career to play at the FIFA Club World Cup," said Mputu, who has begun to attract the attentions of English Premier League clubs. "It will be a great moment, a great challenge, but I have the support of all the Congolese people behind me."