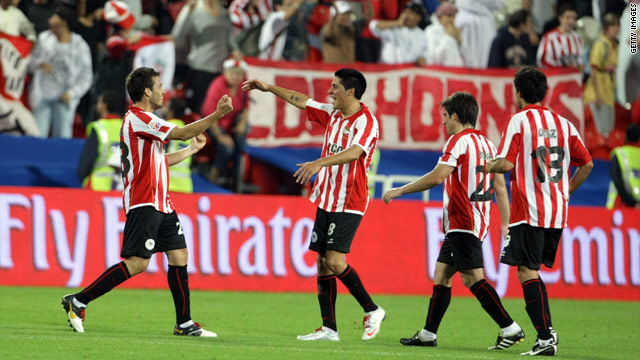 The Argentine side will now face either Barcelona or Atlante on Saturday after a turbulent second half at the Mohammed Bin Zayed Stadium saw the South Korean side finish with just eight players.

Benitez opened the scoring with a free-kick on the stroke of half-time, curling home a 25-yard strike that deceived goalkeeper Shin Hwa Yong.

Brazilian striker Denilson made light of that loss to give his side a chance with a 71st-minute strike -- but within six minutes the Korean side had lost another two players.

Kim Jae-Sung was first to go moments after the goal and keeper Shin followed five minutes later to leave Pohang with eight men.

Mexicans Atlante and European Cup winners Barcelona will meet on Wednesday in the second semifinal.