(CNN) -- Many Zune owners successfully revived their failed music players Thursday morning, while others were still unable to overcome a leap year-related glitch that caused thousands of the devices to simultaneously stop working on New Year's Eve. 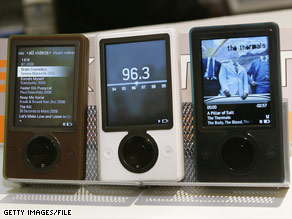 Microsoft issued the first Zune portable music player in 2006 to compete with the iPod.

"Mine is back up and working as of a minute ago! Thanks Zune Team," a user named "blcknwhte" posted at 9:19 a.m. ET on the Zune Web site's forum.

"I'm glad things are back to normal but this was a major inconvenience," posted someone named JaximFlash. "I have 2 Zune 30s and I had made a playlist of songs to play during a New Year's Eve party."

Microsoft Corp., maker of the Zune, said a bug in the internal clock driver, related to the way the device handles a leap year, caused the malfunction in older Zune 30GB models.

Matt Akers of the Zune Product Team wrote Wednesday on Zune.net that the problem should resolve itself after 7 a.m. ET Thursday. The Zune support page says users should allow the internal battery to fully drain, then recharge by connecting the Zune to a computer or AC power after noon GMT (7 a.m. ET) on New Year's Day.

"Once the battery has sufficient power, the player should start normally. No other action is required -- you can go back to using your Zune!" the site says.

"It's 9:15 a.m. [ET] and my Zune is looking just like it did yesterday," posted one user. "Went through the proper steps and still no go. Anybody have any ideas?"

"Mine doesn't work either, and yes, I can read and follow instructions. I did so three times," posted another Zune owner at 10:17 a.m. ET. "I then called tech support, they told me to charge it for 3 hours, and if that didn't work to call them back."

"It seems that every Zune on the planet has just frozen up and will not work," posted a Mountain Home, Idaho, user on CNN's iReport.com. "I have 3 and they all in the same night stopped working."

Another iReporter said he was working the night shift at a Toys R Us store in Puerto Rico when his Zune player and the Zunes of four co-workers all failed about 1:30 a.m. ET Wednesday. iReport.com: They all froze up

"It froze and there was no way to turn it off so you just have to wait until the batteries went dead. You can't push any buttons or anything," Carlos Colon told CNN.

Some Zune users dubbed the crisis "Y2K9" or "Z2K9," a reference to New Year's Eve and concerns over potential widespread computer failures on January 1, 2000 -- fears that proved unfounded.

Microsoft says it will keep users posted via the tech-support page on http://www.zune.net/en-us/support/zune30.htm.

Microsoft released its first Zune 30GB music player, a competitor to Apple's popular iPod, in 2006. No widespread glitches have been reported this week in its second-generation 80GB or 120GB models.

All About Microsoft Zune