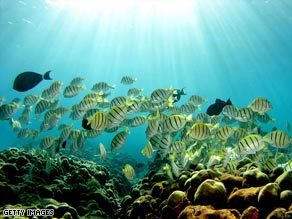 The new areas make up the largest area of ocean set aside for marine conservation in the world -- 195,280 square miles -- and, coupled with a 138,000-square mile designation in Hawaii two years go, mean that Bush will have protected more of the ocean than any other president.

"The president's actions will prevent the destruction and extraction of natural resources from these beautiful and biologically diverse areas without conflicting with our military's activities and freedom of navigation, which are vital to our national security," Perino said. "And the public and future generations will benefit from the science and knowledge gained from these areas."

Bush is using the 1906 Antiquities Act -- first used by President Theodore Roosevelt to set aside public lands such as the Grand Canyon as national monuments -- for the designation. Many of those lands later became national parks.

Bill Chandler, vice president for government affairs for the non-profit Marine Conservation Biology Institute (MCBI), said Bush is "to be commended" for his action.

"From a conservation history perspective, the message here is that Teddy Roosevelt laid the groundwork for our national park system when he withdrew a lot of public lands and called them national monuments," said Chandler.

"We see the president laying the foundation for a system of national marine preserves and parks," he said. "We had lacked such a system for a long time."

MCBI and the Environmental Defense Fund (EDF) partnered to identify eight of the nine sites the president will set aside on Tuesday. All but one of those eight remote areas already have Fish and Wildlife Service refuge areas at their cores.

"You have a core conservation mission already," Chandler said. "This is just basically going to expand them."

The Pew Environmental Fund identified the ninth site -- the waters around the northern Marianas and the deepest ocean canyon in the world, the Mariana Trench, 11,033 meters (36,201 feet) at its deepest.

Bush has not gotten rave reviews for his conservation efforts on land -- according to the Audubon Society, he's signed wilderness legislation covering a little more than 2 million acres, fewer than any other president except Richard Nixon. But Chandler said that Bush "has really embraced ocean conservation as his own."

"Ocean protection ... is lagging 50 to 100 years behind land conservation, he said. "This is precisely the kind of leadership that we need to get the message across that there are places in the ocean that are rich with diversity."

"Scientists already know this," he said. "They have been calling for this for 10 or 15 years."

The president can cut through the bureaucracy that makes protecting resources such a lengthy process, and the Antiquities Act is a strong tool for those efforts. With the Act, the president can make a designation by executive order, essentially "writing the prescription for conservation" for an area, Chandler said.