SHANGHAI, China (CNN) -- When Shi Rui Huan was led through the back entrance of a China Mobile store on the first day of April last year, he had no idea that he was about to be at the center of one of the most significant events in the history of telecommunications in China. 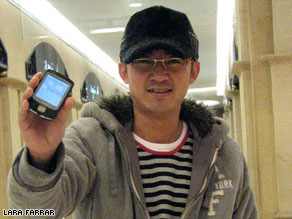 Shi Rui Huan, aka, 'the 3G guy' shows off his 3G phone. Will millions of other Chinese follow his lead?

And he also had no idea that he had just become the victim of the ultimate April Fool's joke. One of his friends had called the day before, told him there was an important meeting he should attend and to be sure to dress up.

It turned out that Shi had been chosen to be the very first person to have the very first subscription ever given out in China for third-generation (3G) mobile phone service. His face appeared in newspapers and on television programs for weeks. Even today he's still known by many as simply "the 3G guy."

Shi, a trendy, 31-year-old who works in advertising and can often be spotted wearing his favorite pair of black cowboy boots while smoking gold-tipped cigarettes, is exactly the type of customer China's mobile phone operators are hoping will be among the first to subscribe for 3G services.

First introduced in Japan a decade ago, 3G wireless networks give subscribers faster Internet connections, which means music, movies and games can be downloaded with greater ease, e-mail can be accessed much more quickly and other multimedia applications such as instant messaging and video-conferencing are possible on a mobile phone.

After a slow start, 3G is now widely used in Japan and Korea, yet has had less than stellar adoption rates across Europe and in the United States, where uptake has been stymied because of expensive handsets and pricing plans, poor network coverage and lack of consumer interest.

For years, Beijing has delayed the rollout of next-generation networks largely to complete technology for its homegrown 3G standard called TD-SCDMA, which many experts say was developed to reduce China's dependence on foreign technology and spur the growth of its domestic telecom industry.

Last spring, the government began testing the new standard among select customers -- Shi was the first -- in a handful of cities and last month announced it would issue 3G licenses to the country's three state-owned mobile phone carriers. China Mobile, the dominant provider by far, received the license for TD-SCDMA, while China Unicom and China Telecom were given licenses for international standards used in Europe and the United States.

The carriers have announced they will collectively spend almost $60 billion over the next several years to build their respective 3G networks while the government has set targets for tens of millions of subscribers by 2011.

Now that the guessing game surrounding when China would finally issue 3G licenses has ended, many experts are wondering exactly what, if any, impact next-generation networks will have in the biggest mobile phone market in the world.

"That is a million-dollar question," said Benjamin Joffe, founder of the Beijing-based mobile and Internet consulting firm Plus8Star. "Essentially if you want to know how a market with 10 years experience is doing, the simplest thing to do is to look at Japan."

While some say the success of 3G in Japan is mostly hype, the country, which has over 80 percent adoption rates, has become home to a "thriving mobile ecosystem," said Joffe, noting that second-generation (2G) handsets are no longer sold there.

Two of the richest mobile social networking companies in the world are based in Japan, along with a number of other highly profitable firms that have developed cool content and even cooler applications, such as mobile commerce and mobile auctions, for 3G phones.

Similar businesses have begun to emerge in China and are creating mobile platforms aimed at the country's technologically savvy youth, hungry for entertainment on-the-go and turned on by flashy 3G phones.

"It is very good for us," said Alvin Wang Graylin, whose Shanghai-based mobile search and ad provider mInfo is positioned to directly benefit from 3G's higher data speeds. "[Subscribers] will use more mobile Internet and more mobile data services, leading to more ad inventory," he said.

According to Frost & Sullivan's senior industry analyst Marc Einstein, even without 3G networks Chinese telecoms already earn over 20 percent of their revenues from non-voice data usage, like text messages and ringtone downloads, which is on par with carriers in the United States where high-speed networks have been in place for years.

"I think this bodes well for future uptake in the market," said Einstein. "China is leaps and bounds ahead of most other emerging markets, notably India where the figure is more like 10 percent."

However unlike 3G users in other markets, those in China have considerably less cash, which means its widespread adoption may boil down to one thing: cost. In a country where the average per capita income is only a few thousand dollars a year, next-generation wireless service may be prohibitive for a while.

"In terms of immediate impact on the market, it is going to be very limited just like it was in any other country that launched 3G -- in the first two years, nothing happened," said Joffe. "There won't be miracles."

Power of the Chinese consumer

But if prices are affordable, especially on the handset side, some believe the demand for 3G may be driven by consumers in second- and third-tier cities which simply want to log onto the web.

"Pure Internet usage will be a strong driver," Nokia spokesman Thomas Jonsson told CNN. "Today there is already a very high number of Internet users and the first time they enter the Internet is through their mobile phones."

And also for the first time, consumers may have more power than ever to shape the state-controlled telecommunications industry, which was restructured last year to pave the way for 3G and introduce more competition.

Faced with China Mobile's unproved TD-SCDMA network that works mainly with less-than-fashionable handsets from domestic companies, many Chinese may choose to switch the other carriers that have tried-and-tested 3G standards and are compatible with brand name handsets from foreign manufacturers.

"I think consumers will ultimately be smart, and that is a challenge for China Mobile," Duncan Clark, chairman of consulting firm BDA China, told CNN.

"There is a good market in China," added Clark. "Chinese like to adopt technologies and show them off."

Shi, who switches mobile phones at least twice a year, says he already is on the lookout for the next cool handset to flash around in front of his friends. Yet when it comes to talking about being the first-ever 3G subscriber in China, he is slightly less exuberant.

"It is not a very important thing in my life," he said while smoking one of his golden cigarettes and sipping tea. "It was just a joke."