GRAYSON, Georgia (CNN) -- It's 9 a.m. when Cylindrian Rutabaga takes the microphone at a familiar bar. 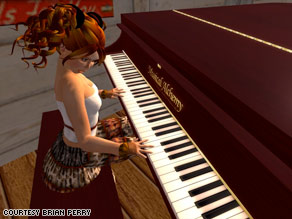 An avatar named Cylindrian Rutabaga earns tips at a 9 a.m. show in a virtual bar.

The funny-named musician with crinkled red hair, a white blouse and flowing skirt picks up her custom-made guitar and looks across the audience with a blank stare.

Her fans already are rocking out: Some breakdance on the bar's tile floor. Others flail about with the vigor of '70s disco dancers. One man with a towering afro and 3-D glasses looks like he's swimming the backstroke to some nonexistent beat.

The randomness of the scene doesn't seem to faze Cylindrian.

She isn't shocked even when hordes of other fans -- including one man who wears a kilt and is followed by a small herd of sheep -- start teleporting into the room.

After all, Cylindrian lives in the online community of Second Life. Here, anything goes.

With the recording industry in near-shambles and the recession taking a hit on art of all kinds, some musicians, visual artists and fashion designers have turned to another virtual frontier -- Second Life -- to sell CDs, earn tips, move paintings and grow international followings.

The realm of Second Life -- available free online -- allows users to create avatar versions of themselves. These virtual personas mingle about in a three-dimensional, pixilated world not entirely unlike our own: Second Lifers own digital real estate, go to virtual jobs and attend virtual concerts and art shows.

Second Life avatars purchase goods and services with a currency called Linden Dollars, or L$. They sometimes pay to attend concerts and often tip the performers in the virtual venues. Others buy clothing and hairdos for their online personas.

Linden Dollars can be converted into most of the world's currencies in the same way a foreign traveler might change dollars to Euros. The going rate is about 260 L$ for $1 U.S., according to the Second Life Web site.

Most of the Second Life world is organized on a grid, kind of like a real-world map. Avatars can enter x, y and z coordinates to "teleport" to a particular island or city. They can also fly and walk between locations, or search for places when they don't have coordinates.

More than 1 million people have signed up to use the program since it was created in 1999 by a San Francisco, California, company called Linden Lab.

As life in the real world gets tougher, more artists are turning to Second Life to supplement their incomes, said Mike Lawson, a 41-year-old who fronts as a drawling blues singer, Von Johin, in Second Life.

"You've got professional musicians from all genres coming into Second Life now and playing," he said. "The Internet is a great equalizer. You have people who have never played in front of anybody in their life getting a shot."

Linden Lab does not track the number of artists or concerts in Second Life, but there are likely thousands of musicians working in the simulated world, said John Lester, a developer at the company.

There also are about 600 visual art galleries in Second Life, and that number is increasing, according to the woman behind Bettina Tizzy, an avatar that blogs about the Second Life arts scene (Tizzy did not want her real name used for fear her real-life business clients would be alarmed she has a Second Life persona).

Some avatars look nothing like their owners, but Cylindrian the computer creation looks somewhat similar to real-world folk musician Grace Buford, who controls the virtual-world singer from a cramped home office in suburban Atlanta.

Both Cylindrian and Grace have red hair. Both are 5 feet 3 inches tall. Both wear flowing, hippie-esque clothes that wouldn't look out of place at a Medieval festival. The noticeable difference between avatar and creator is that Buford wears glasses and Cylindrian doesn't.

"I wanted people to feel like they're having an interaction with the real me -- because they are," Buford said.

Buford, a 37-year-old single mother of two, wore fuzzy blue slippers and glasses as she belted out heartfelt melodies to a real-world audience of two reporters.

Normally she would be in her house alone after dropping off her 11-year-old son at school.

She sits with a guitar on her lap and a microphone and keyboard in front of her. A slender silver laptop on a table to her right shows her avatar performing to the dance-happy crowd in the Second Life venue.

About 70,000 people are logged in and wandering around the computer-based universe this recent morning. A few dozen have teleported themselves into Mandel 'BRATs & BREW,' a bar on a tropical island and artist community called Artropolis.

Her avatar holds a guitar and her mouth opens and closes from time to time, but Cylindrian's movements don't quite mimic Buford's. When Buford stops playing, Cylindrian usually continues strumming silently. It's a setup that Buford admits is a bit awkward, but she says Second Lifers still get the point.

Buford streams the audio from her at-home performance straight into the virtual bar scene, where the audience hears it on about a 20-second delay. Followers send her text messages in Second Life while she plays, requesting songs, typing along with the lyrics and commenting on the show. iReport.com: Share stories from Second Life

"As an artist, it's so great that people actually know your music," she said between songs, her avatar still in autopilot, pounding silently on a piano. "They'll type in the lyrics as I'm singing. It's almost like they're singing along ... It's like, 'Oh, I'm a superstar for just a moment.' It's so cool!"

'Intimate conversation with the listener'

In some sense, Buford prefers this virtual interaction to real world concerts, which she also plays.

That's partly because, in Second Life, the audience can't drown you out with chatter.

"I can go into a club or a venue in the real world and people aren't listening. They're talking, laughing, carrying on. And as an artist, we're all a little bit narcissistic. We've created this work and we want to share it and have an intimate connection," she said. "On stage, you kind of think, 'What's the point of me being here?' In Second Life ... you're having that intimate conversation with the listener."

Buford used to play open-mic shows frequently. But she felt threatened by drunk fans after one performance. In Second Life, she still gets real-time interaction with fans, and it's also less risky, she said.

Cylindrian was among the first musicians to start playing Second Life. Buford joined the virtual world in 2006 specifically to use it as a platform for her music. Her audience now extends into Australia and Europe, which never would have been possible without Second Life, she said. The evening after the 9 a.m. show, she was scheduled to play a concert with an artist from Wales.

Cylindrian plays Second Life shows several times per week, often at strange hours that let her catch audiences in other time zones. One of the weekly shows typically is scheduled for 11 p.m., which is "prime time" on the West Coast of the United States, she said.

She typically reserves her mellower songs for that performance because her duplex neighbor doesn't particularly appreciate late-night jams. For that reason, Buford said she's thinking about soundproofing the bare-walled office where she normally plays.

Second Life so far has provided Buford with a supplement to her main sources of income, which include teaching music lessons and playing live shows in the real world. Both have taken a hit because of the recession, she said, which makes the $10,000 or so she earns in Second Life each year all the more important. (That amount includes CD sales to Second Life fans and CDs sold through the site).

"Because of the economy in the real world, I'm losing a lot of students," she said, "so performing in Second Life helps me keep food on the table."

She added: "Being a single mom and finding a way to support my family -- this has been a tremendous experience." iReport.com: Making virtual moolah

Most of the money comes in tips. During her recent hourlong performance, Buford made about $18 (L$ 4,680). Not a bad hourly rate, she said, but low for her typical Second Life gig.

Cylindrian has a booking agent in Second Life -- an avatar that wears a micro-miniskirt and boots that climb up to mid-thigh. In the real world, though, Buford has to arrange her own gigs.

Other musicians have made careers for themselves in Second Life.

Lawson, the blues singer, signed a record deal with Reality Entertainment last summer after his avatar was scouted in a Second Life concert. At first, the Nashville singer said it seemed too bizarre to be true.

"If you're a cartoon bluesman and some cartoon walks up to you and says, 'Hey, I'm from a record label and I want to give you a deal,' what's your first reaction gonna be? 'Yeah right, thanks buddy. Have a good night.' Who know who's behind an avatar walkin' up to ya, right? I actually blew off the label four or five times just thinking someone was screwin' with me," he said.

An album is set to be released under his avatar's name in a few months, he said. He barely has time to play real shows anymore because his Second Life schedule is so full.

He doesn't think Second Life will suck all real-world musicians in, though.

"The live concert experience is never going to change," he said.

What Buford loves most about Second Life is what she also likes about the real world: its people. She says she has met many friends in Second Life. They hang out in both the real and virtual worlds.

Her latest mission is to merge the two. At real-world concerts, she has started setting up projection screens that let the audience see the parallel concert as it streams into Second Life.

Her marketing reinforces this duality. Buford has handouts showing the real her sitting back-to-back with her avatar. "Grace Buford is...Cylindrian Rutabaga in Second Life," the fliers say. Such a simple statement is necessary because some of her fans are just now figuring out she exists in both worlds.

Buford ends her recent morning concert with a cover of "Coin Operated Boy," a staccato piano song by The Dresden Dolls:

At the end of the song, as if to remind everyone that this is Second Life, not the real world, a thankful fan throws a virtual monkey onto the stage.