LONDON, England (CNN) -- Online retailer Amazon has said a system error caused it to remove a number of gay and lesbian-themed books from its sales charts. 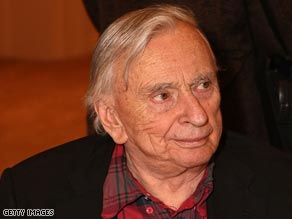 American novelist Gore Vidal has long been known as a liberal intellectual.

On Sunday, a number of distinguished writers, including Gore Vidal, Annie Proulx and E.M. Forster, suddenly lost their best-seller ranking -- which is the number that Amazon uses to show how well one title sells compared with another.

As a result, famous novels such as Proulx's "Brokeback Mountain" and Vidal's "The City and the Pillar" were unranked Tuesday morning. However, Playboy: The Complete Centerfolds" by Chronicle Books, which features pictures of over 600 naked women, remains ranked.

Amazon spokeswoman Patty Smith told CNN partner Web site CNET News that the "glitch" was being fixed, but declined to elaborate. "This is an embarrassing and ham-fisted cataloging error for a company that prides itself on offering complete selection," she wrote in an e-mail statement.

"It has been misreported that the issue was limited to Gay & Lesbian themed titles -- in fact, it impacted 57,310 books in a number of broad categories such as Health, Mind & Body, Reproductive & Sexual Medicine, and Erotica," the statement said.

"This problem impacted books not just in the United States but globally. It affected not just sales rank but also had the effect of removing the books from Amazon's main product search."

Craig Seymour, author of gay memoir "All I Could Bare," wrote in his blog, "craigspoplife," that his sales rank was dropped earlier this year, only to be restored after a month. Amazon said his book had been classified as an "adult product."

"I brought this to the attention of my publisher, and they started looking into it," Seymour wrote. "I also did some snooping around and it turned out that the only books I could find without a "sales rank" had gay content like mine."

Thousands of users have voiced their concerns online, with many accusing the retail giant of blatant censorship. This prompted Amazon to deny the move was part of a strategy to make the chart more "family friendly." It said the changes were caused by a "glitch" in the system.

The ranking removal appeared to depend on how Amazon originally categorized each book.

According to the Guardian newspaper, a paperback edition of British broadcaster and actor Stephen Fry's autobiography "Moab Is My Washpot," which Amazon tags as "gay," is unranked, whereas the original hardback, filed under "memoir," is.

The issue quickly became a hot topic over the weekend among Twitter users. In conversations under the hash tag "#amazonfail," people tagged hundreds of titles affected by the apparent glitch. Others simply mocked the e-tailer. Share your views here

"Looks like Amazon did a government style u-turn. Of course it was an error, yes," was the sardonic response from Jonnyp. Houseinrlyeh, meanwhile, said "apologies work best when they contain an actual apology and not just an explanation."

Nara Filippon was one of the many outraged Facebook users to make their feelings known on various discussion boards. After describing herself as a loyal customer she said: "Unfortunately your new policy to ban LGBT books has disappointed me and I won't be buying anything else from your Web site from now onwards."

Wendy Sumner Winter, who described herself as a straight college professor, said: "I am sickened to see that the powers-that-be have de-ranked some of my favorite authors and their books, including James Baldwin (are you serious!?), Mark Doty and Paul Lisicky."