(CNET) -- The prepaid cell phone market has finally hit the U.S. in a big way as economically strapped consumers flock to inexpensive pay-as-you-go services. The result will likely mean that big cell phone providers may be forced to slash prices on contract service plans to keep consumers from defecting. 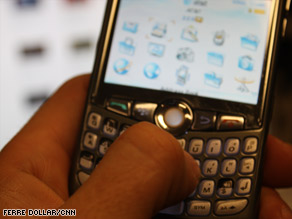 This is good news for consumers, who could see lower prices on both prepaid and post-paid service plans. But it is very bad news for cell phone operators, which make more money from their post paid customers than they do from prepaid customers.

Prepaid cell phone plans, which have been very popular in Europe and other parts of the world for several years, allow consumers to buy a phone at full retail price, without committing to a contract, and pay for service in advance.

By contrast, post-paid services require consumers to sign a one- to two- year service contract, and their usage is billed on a monthly basis. In exchange for signing a contract, wireless operators often subsidize the cost of the phone.

For years, the post-paid business model has dominated the U.S. cell phone market, providing strong growth for U.S. wireless operators. Meanwhile, the prepaid market in the U.S. has been largely left to consumers who are young, price-sensitive, or considered credit risks.

While all of the major cell phone operators offer prepaid services, smaller operators, such as Leap Wireless, MetroPCS, and Virgin Mobile USA, have largely dominated this market.

Now, it looks like the tide is turning. First-quarter earnings from all of the major cell phone operators indicate that consumers are flocking to new all-you-can-eat prepaid plans instead of the contract-bound post-paid plans.

Meanwhile, prepaid customers are on the rise. A year ago about 50 percent of new cell phone users signed up for prepaid cell phone service, Moffett said in his note. But in the first quarter of 2009, about 80 percent of cell phone subscriber growth came from prepaid plans.

Sprint Nextel, which reported results on Monday, is the most obvious example of how things appear to be shaking out in the wireless industry. Sprint added about 674,000 new prepaid subscriptions in the first quarter, according to Moffett's estimates. But the company lost nearly 1.25 million post-paid subscribers.

Sprint's service, offered through its subsidiary Boost Mobile, uses excess capacity on the former Nextel iDEN network. So the low-cost service didn't require an expensive network upgrade. The service launched in January, and it was deemed a huge success. Sprint executives said Monday the initial uptake of the service was more than the company had expected.

It seems the $50 price tag could be too good for some consumers to pass up. Comparable post-paid service plans offered by AT&T and Verizon Wireless cost $99.99 a month. And Sprint's own "Simply Everything" plan, which includes unlimited Web surfing and e-mail in addition to unlimited voice and messaging service, costs $99.99 a month.

Sprint's CEO Dan Hesse said during the conference call with analysts and investors that there "is no question that there is a movement toward prepaid." But he was careful to point out that he doesn't see the prepaid market cannibalizing the more lucrative post-paid business model. In fact, he said that the prepaid market is actually expanding the entire wireless market.

"Some of these prepaid customers are people using cell phones for the first time," he said. "So I think overall, as an industry, we will see more revenue growth than we would have seen without prepaid services."

But with more than 80 percent of the U.S. population already using a cell phone service, it's getting harder to sell wireless service to people who don't already own a cell phone. That means that wireless operators are already trying to steal each other's existing customers.

They are more likely to switch back and forth between service providers. And they typically use more network resources, averaging around 2,000 voice minutes per month compared to about 1,000 minutes per month, than post-paid customers.

As a result, carriers, such as Sprint, that are growing their prepaid subscriber base at the expense of their post-paid customers, will, over time, make less money, Moffett reasons.

But regardless of whether carriers want to offer more prepaid services, the troubled economy is likely accelerating the trend. As more Americans lose their jobs and household budgets get tighter, some cell phone subscribers are starting to opt for cheaper prepaid cell phone plans when their current post-paid contracts run out.

A recent study conducted by Opinion Research Corporation (ORC) for the New Millennium Research Council (NMRC) suggests that many people are already canceling their cell phone plans and getting prepaid cell phones as a reaction to the financial crisis.

It is clear that the current trend is probably bad for wireless operators. But if more wireless operators match Boost with their own $50 all-you-can-eat prepaid service plans, a pricing war could emerge, which will likely benefit consumers. And it's very likely the price drops won't stop at the prepaid plans. If carriers start losing even more post-paid customers, they may also be forced to reduce the price of their contract-based all-you-can-eat plans.

But because most prepaid services only offer basic phones, the price war may not immediately affect more advanced smartphone sales and service plans. Still, as the cell phone market reaches saturation, wireless operators can't afford to lose any subscribers.