(CNN) -- In death as in life, Michael Jackson continues to light up the Internet. 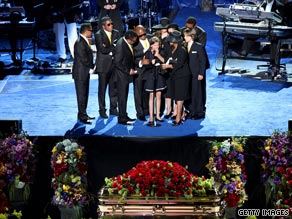 Millions of people around the world watched coverage of Jackson's memorial service on the Web, although the event appeared to fall well short of online viewership records.

Global Web traffic was at least 19 percent above normal, and as high as 33 percent above normal, during most of the star-studded memorial at the Staples Center in downtown Los Angeles, California, according to Akamai Technologies, a Massachusetts-based firm that monitors Internet traffic.

Jackson's startling June 25 death nearly brought the Web to a standstill, with several sites buckling under the sheer weight of traffic. The Internet appeared to fare better during Tuesday's memorial service, however.

"So far we are seeing some slowdowns ... [but] overall the Internet is performing OK," said Dan Berkowitz, spokesman for Keynote Systems, a mobile and Internet monitoring firm based in San Mateo, California, midway through the Staples Center event. Keynote monitors the 40 most popular news Web sites from major cities around the United States.

CNN.com partnered with Facebook, the social-networking site, to let friends and family share commentary while watching Jackson's memorial service live online. As of 1:30 p.m. ET, shortly before the memorial service began, the partnership was yielding about 6,000 status updates per minute, said a Facebook spokeswoman.

CNN.com and Facebook entered into a similar collaboration during Obama's inauguration, although Facebook saw twice as many status updates during that event.

With many North Americans at work during Jackson's memorial service, online traffic had been expected to reach near-record levels.

"This event will almost certainly shatter records for the biggest single live stream ever, and could be one of the biggest worldwide media events in history," wrote blogger Ben Parr on Mashable, the social media news site.

The 10 most popular topics on Twitter Tuesday afternoon were all connected to Jackson's memorial. Google Trends rated the Jackson memorial's online popularity as "volcanic," while on Web-traffic monitoring site Alexa, most of its hottest stories Tuesday were Jackson-related.

But early numbers suggested that Internet traffic Tuesday may have lagged behind other recent news events.

Akamai recorded a peak of 3.9 million global Internet visitors per minute shortly after noon ET -- less than half the number of users who went online the evening of November 4, 2008, to follow presidential election returns.

"It may be impossible to say for sure how many people watched once all is said and done, because there's still no comprehensive way to measure Web viewing," said Toni Fitzgerald, managing editor of Media Life, in an e-mail interview with CNN.

Long before the memorial service began about 1:40 p.m. ET, many Web sites braced themselves for an onslaught of traffic.

During the sign-up period for the memorial ticket lottery, the Staples Center Web site took down all non-essential materials to ensure that it coped. Jackson family spokesman Ken Sunshine said the computer servers hosting the registration site counted 500 million "hits" -- 120,000 a second -- in the first 90 minutes on Friday.

About 17,500 fans were randomly selected to watch the memorial live at the Staples Center -- only a small fraction of the 1.6 million fans who applied for tickets.

CNN's Stephanie Busari and Linnie Rawlinson contributed to this story.