JOHANNESBURG, South Africa (CNN) -- The SEACOM cable being promoted as a computer lifeline for Africa will contribute to social upliftment but not immediately, a telecommunications analyst says. 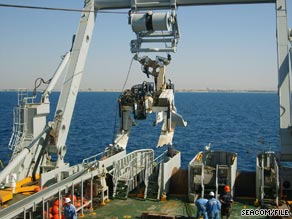 Seacom cable in the Red Sea

Hodge said it will not initially change the lives of those poor people, sitting in the rural areas without lights or electricity.

He added that because of the competitive climate surrounding SEACOM, it will lead to cheaper connectivity, making the Internet more affordable for more people.

And that will contribute to social upliftment in the long-term, Hodge says.

SEACOM is the first cable supplying east Africa, which until now has been reliant on satellite connections.

Hodge pointed out people in South Africa have already benefited.

Service providers have reacted to the imminent arrival of the SEACOM cable by adjusting their prices, and more cuts are seen, as the local providers respond to the increased competition, he said.

SEACOM is owned by a lot of divergent companies, all competing amongst each other.

Strong competition within the cable itself should drive prices down and avoid any price collusion among the various providers, Hodge said.

He added that would please the cynical South African consumer and help liberalize South Africa's communications industry, long seen as lagging behind everyone else in connectivity due to lack of competition.