Is this the end for Ratchet & Clank?

By Larry Frum
for CNN

(CNN) -- When does a video game franchise end? 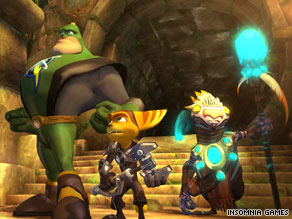 Ratchet, center, is a cat-like creature and the primary hero of the Ratchet & Clank game series.

It's sometimes hard to tell. The immortal Mario the plumber has appeared in more than 200 video games since 1981 and is still going strong.

However, one popular series may be ready to give its fans some closure. Ratchet and Clank have been spanning their fictional universe since 2002 in an effort to defeat evil and save all from certain doom. The franchise, about two intergalactic heroes fighting evil, has sold more than 16 million copies.

Despite that, the game's developers are hinting that the upcoming "Ratchet & Clank Future: A Crack in Time" may be the last in the series, an unusual occurrence for an industry in which sequels to best-selling games are often announced far in advance.

Brian Allgeier, the game's creative director, says that "A Crack in Time," the seventh Ratchet & Clank title produced by Insomniac Games, closes a chapter in the series by tying up many loose ends. The game was written with fans in mind and answers their questions while providing more background about the protagonists and their destinies, he said.

"Never say never, but people need that closure," Allgeier said. "We hope to be wrapping things up with a bow."

Wrapping things up? Such talk has spawned much hand-wringing among gamers online.

"They can't end Ratchet and Clank after this, they just can't," wrote a user named toddx77 on a Gamespot message board.

"Ratchet & Clank Future: A Crack in Time" is due out October 27 for Sony's PlayStation 3 console. The series chronicles the exploits of main character Ratchet, a cat-like creature with really cool weapons, and his diminutive robot ally, Clank. The pair journey to exotic planets and battle various biological and robotic villains.

Allgeier said the plotline will be different in this game because it tells the story from two perspectives and gives the fans a chance to find out more about Clank.

"People think [Clank] was created in a robot factory and was just a random glitch," he said. "They'll find out it wasn't random at all."

In developing this new installment of the video game, Allgeier reached out to the series' dedicated fans.

Insomniac held a contest and asked fans to submit designs for weapons they'd like to see in the game. Allgeier said the submissions were very creative and stayed away from "push-the-button-and-the-planet-explodes" weapons.

The contest winner was Jackson Finley of San Diego, California, who designed a yo-yo, buzzsaw-type weapon called the Spiral of Death.

Fans will also get to hear cameo appearances of characters from past Ratchet & Clank games on "Space Radio" while flying from planet to planet, a new transportation mode that Allgeier said allows for a more free-flow style to the gameplay.

Allgeier feels the new game is a tribute of sorts to the series' legion of supporters.

"We have a huge fan base and we wanted to give back to the community," he said.

But rumors of the end of the series, or perhaps splitting the title characters into spinoff games, have some fans pleading for more.

On the Gamespot boards, Blackwings17 wrote, "This has been one of the best franchises for any PlayStation console, and the series has only improved again and again with each new game. Why the flippin hell should they end a series that is only improving each and every day?"

Allgeier would only deflect questions about the fate of his galactic heroes. "All I'll say is we have a couple of surprises at the end of the game," he said.

Gamers will have to wait until the 27th to find out what those are.

All About Video Games • Sony PlayStation