When it comes to making data sexy, you can't be too graphic 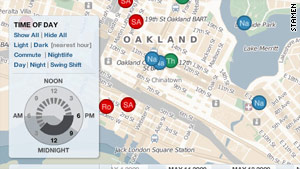 (CNN) -- The good news: data from governments and other organizations is increasingly open and online. The bad news: it's rather dull.

The result? A booming interest in data visualization, which can transform boring stats into compelling graphical presentations explaining our world.

But while "we are collecting data like maniacs," he adds, "our ability to gather data is much greater than our ability to make sense of that data."

Web sites like Data.gov -- a priority of the Obama administration -- keep pumping out more data sets, while watchdog organizations like the nonprofit Sunlight Foundation, founded three years ago, keep pushing for even more to be opened up.

Cities like San Francisco, Washington D.C., and New York meanwhile hold developer competitions to encourage greater use of the data sets they're releasing, with iPhone apps being of particular interest.

One of its projects, the San Francisco Crimespotting web site, shows an interactive map of the city overlaid with colored circles representing robbery, narcotics, murder and so on. The data comes from police reports.

Those reports have been filed for decades, of course, but the site is so slick and intuitive that it makes the public use of them far more likely now.

"You'd never go to the police crime logs and just sift through them, but everybody has a very high interest in knowing what kinds of crimes are happening now around them," notes John Geraci, cofounder of hyperlocal news site Outside.in.

Those who follow the field point to two particularly compelling examples of data visualization in recent years. Al Gore memorably visualized scientific data on CO2 emissions in the 2006 documentary "An Inconvenient Truth," needing a mechanical lift to reach the top of a chart showing their dramatic effects in recent times.

"That's really currently the graph of our generation," says Andrew Vande Moere, a design lecturer at the University of Sydney who blogs about data visualization at Information Aesthetics.

And at the TED technology conference a few years back the Swedish public health professor Hans Rosling transformed dull U.N. data about emerging nations into moving bubbles and flowing curves that playfully debunked myths about "the developing world."

Robert Kosara, an information visualization expert at the University of North Carolina at Charlotte, described it as a talk that "I will keep linking to until everybody has watched it at least five times."

Rosling's non-profit organization, the Gapminder Foundation, developed the software he used in the presentation a few years ago. Created for the animation of statistics, it quickly attracted the interest of Google, which now offers it as a simple-to-use free gadget in Google Spreadsheet called Motion Chart.

Meanwhile the Gapminder Foundation continues to push for the "increased use and understanding of statistics and other information about social, economic and environmental development at local, national and global levels."

The Open Society Institute also sees the social value of good data visualization, which it describes as "a powerful tool for advocacy, outreach, research, organization, and education." That's why it commissioned a free how-to booklet on data visualization for NGOs.

Artists get in on the act

Lima started his Web site about data visualization, Visual Complexity, about five years ago, while he was still an arts student in New York.

"It was really hard for anyone doing research in this field to go to a Web site and find what people were doing," he says.

His site started off with about 80 examples of interesting data visualization and now has over 700. The site, which he continued as a side project, grew alongside the growing interest in data visualization, to the point where he recently left his interaction design job at Nokia to write a book on the topic.

When he started covering the field about five years, he says, it was still "very closed."

He recalls going to the annual InfoVis conference and seeing only a handful of fellow artists among mostly computer scientists. Now the art and design communities are well represented at the conference -- and in the field.

But it isn't just artists who've moved into the field. It's everyone. An array of sites now make it easy for anybody to upload data and then render it into entertaining visuals.

Examples include Daytum, Swivel, and Many Eyes, the latter being one of the pioneers. Its site states: "We want to democratize visualization, enabling anyone on the Internet to publish powerful interactive visualizations and start their own data conversations."

Another democratizing factor is how easy it is to include along with one's visualization a link back to the raw data that was used, assuming it is public.

But not all of it is. Daytum, founded last year, is witnessing people upload all kinds of "life-casting" visualizations based on data only they would know, everything from all the food they consumed last month to how many times they had sex, which is sometimes broken into further categories.

"I've really enjoyed how free some people have been in a public way with their information," says Nicholas Felton, a graphic designer and cofounder of the site.

He himself has done quite a bit of life-casting over the past few years, recording minute details of his daily activities over long periods. His amusing "annual reports" of his life were an inspiration for Daytum.

He is not however, on top of all aspects of his existence. "I know exactly what beers I drank for probably the last three years," he says. "But," he admits, "I'm a terrible personal finance manager."