(CNET) -- Microsoft recently announced retail pricing for Windows 7 that was at or below comparable Windows Vista prices, while also offering a chance for people to preorder the software at a substantial discount. 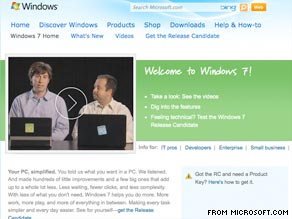 Microsoft confirmed that a program offering Vista PC buyers a free copy of Windows 7 will kick off on Friday.

From Friday through July 11, consumers in the U.S. will be able to buy an upgrade copy of Windows 7 Home premium for $49 or Windows 7 Professional for $99.

That offer is good for both XP and Windows Vista PCs, regardless of whether someone has been trying out the pre-release version of the operating system.

That matches the details in a memo from Best Buy that leaked earlier this month.

The offer, however, is limited in both duration and by the number of copies Microsoft is willing to sell, although Microsoft would not specify that figure. The upgrade will be available at Amazon, Best Buy, Microsoft's own store, Office Depot, OfficeMax, Costco, Staples, Wal-Mart and several other retailers.

"That truly is a price that we have never even come close to in terms of an operating system release," corporate vice president Brad Brooks said. "We've still got a business to run."

Of course, even at the preorder price, Microsoft still finds itself undercut by Apple, which has said it will only charge $29 for Leopard users moving to Snow Leopard (those on older versions of the Mac OS will have to buy a full-boxed copy combining Leopard and Snow Leopard).

Brooks, however, said that comparing the two upgrades is unfair.

"Even their chief software architect called (Snow Leopard) an upgrade of Leopard," Brooks said. "The way I look at it, its a service pack and we don't charge for service packs."

Microsoft also confirmed, as expected, that a program offering Vista PC buyers a free copy of Windows 7 will kick off on Friday.

When boxed copies of Windows 7 go on sale on October 22, Microsoft plans to charge $119 for Home Premium, $199 for Professional and $219 for Ultimate.

The Home Premium upgrade is down $40 from the product's original price, although the Vista product had already gotten a price cut along the way. The Professional and Ultimate versions are priced similar to where Microsoft was with Vista.

The upgrade prices apply to those moving from a previous version of Windows to Windows 7, but only those from Windows Vista will be able to upgrade without doing a clean installation of the product.

The full versions of Windows 7--the editions for those without a copy of Windows -- will be priced at $199 for Home Premium, $299 for Professional and $319 for Ultimate. The Ultimate and Professional editions are again on par with their Vista counterparts, while Home Premium is down from the $239 that Microsoft had charged with Vista.

Microsoft also plans to offer the operating system in an easier-to-open box.

Brooks said Microsoft made that move to avoid having to delay its launch in Europe and added that boxed copy sales make up only a fraction of its total Windows sales in Europe and throughout the world.

"It does not delay the introduction of Windows 7 into the market and it gives our European customers the best possible price."

The software maker is speeding up the pace of the international launch of Windows 7 compared with past launches. Computer makers will be able to ship new PCs in all languages on launch day.

"It truly will be a global release and make it a Windows 7 holiday for everybody this year," Brooks said. "People wanted it faster. We're giving it to them."