STERLING, Alaska (CNN) -- From the Seavey dog sled kennel you get a clear view of the Redoubt volcano, and the Seavey family is watching closely. 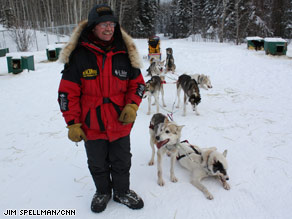 The volcano is expected to erupt any day now, and the Seaveys are trying to find a way of keeping their prized sled dogs safe from the ash that may fall over a large portion of Alaska. The ash is highly abrasive and dangerous to breathe in for both humans and dogs.

"How we react to the volcano is going to depend on the scope of it, I guess. We have my grandfather's kennel we can move to about 200 miles from here," said Danny Seavey, adding with a laugh: "If it's so big that it covers most of the state then I don't now what we're going to do. Move to Russia or something, I guess."

But moving the dogs 200 miles away is no easy task.

The Seavey kennel has about 100 sled dogs that are training for the Iditarod sled dog race that begins in early March. The race spans 1,150 miles, from Anchorage to Nome. To make the run, the dogs must be in tip-top shape. The Seaveys can't afford a break from training the dogs, and they can't allow the dogs, who sleep outside in small crates, to be exposed to the dangerous falling ash.

"They are very well fed, highly trained athletes," said Seavey. "We're only a month from the Iditarod. They need to be training right now." iReport.com: Seen the Iditarod? Prepping for the volcano?

Seavey expects to have very little time to get the dogs to safety.

"Oh, yeah, it would be in a hurry. At the current wind conditions we would have about two hours from when it blows to when the ash gets here," he said.

"We have big trucks, and each dog has a little kennel that they can hop in ... so we have three of these trucks, and we can move 60 or 70 dogs that way."

Watch the sled dogs in action »

Seavey says the canine exodus is "going to look crazy, a bunch of dog trucks and horse trailers running east. That's our only plan right now."

Plans are easier to come by for the human population of the Kenai Peninsula. Scott Walden is the emergency management coordinator for the Borough of Kenai.

"It can create a sense of panic," Walden said. "It's sudden. It's hard to predict when and where it's going to hit."

He was fire chief when Redoubt last erupted in 1989 and says the biggest hazard is the slippery driving conditions the ash will present. The borough plans to close schools as soon as Redoubt blows, hoping to get all the kids home safe in the two hours they will have between the eruption and the ash hitting the ground.

Walden is instructing people to take shelter and hopes to keep most people off the road for about a day while the ash falls.

He says everyone should have paper respirator masks, plastic sheets to seal up their houses and a weather radio to monitor the situation.

Down the road at the Home Depot, manager Mark Pierson says business in Redoubt-preparation supplies has been brisk

"The biggest thing that we're selling is the dust masks," says Pierson, who had to order extra stock. "We've bent over backwards to make sure we have these for the customers."

Pierson grew up on the Kenai Peninsula and was here when Redoubt erupted in 1989 and when the nearby Augustine volcano erupted in 1986. He saved ash from the Augustine eruption in a jar. He says people here are used to dealing with nature and the hardships that come from living in a place that can be beautiful one minute and dangerous the next.

"I think people here want to be prepared, but I don't see too many people over-reacting," he said. "You learn not to panic, you learn to be prepared."

All About Geology • Alaska