(CNN) -- Canadian researchers say they have discovered the smallest known North American dinosaur, a carnivore that roamed areas of the continent 75 million years ago and weighed less than most modern-day house cats. 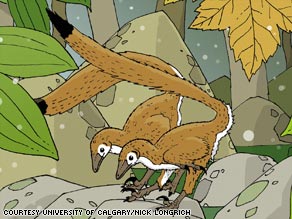 Hesperonychus elizabethae, a 4.4-pound (2-kilogram) creature with razor-like claws, ran through the swamps and forests of southeastern Alberta, Canada, during the late Cretaceous period, the researchers said.

"It's basically a predator of small things," Longrich said.

Longrich co-wrote a paper on the dinosaur with University of Alberta paleontologist Philip Currie. The paper appeared in Monday's Proceedings of the National Academy of Sciences.

Although fossilized remains of Hesperonychus were collected in 1982, they remained unstudied until Longrich came across them in the University of Alberta's collection in 2007, the university said. Because of their size, some of the fossilized parts had been thought to be from juveniles.

Longrich said he suspected the claws had come from another, smaller adult species, but said finding a fossilized pelvis in which the hip bones were fused -- which happens only once an animal is fully grown -- convinced him.

"The claws were kind of a bread-crumb trail that we followed along," until finding the well-preserved pelvis, Longrich said.

Albertonykus borealis, a 2.5-foot-long insectivore, had been previously thought to be the smallest North American dinosaur.

Longrich came across the dinosaur's bones in storage at the Royal Tyrrell Museum in Drumheller and decided to analyze them, Canadian Broadcasting Company reported in September. A dinosaur smaller than Hesperonychus has been found in China, Longrich said.

He said he found searching through museums' storage more productive in the short term than working in the field.

"People collect stuff so much more quickly than they can process," he said.

All About Canada • Paleontology