(CNN) -- The mysterious burst of light in the sky and loud booms witnessed Sunday night by residents along the Mid-Atlantic coastline was likely caused by a Russian rocket booster re-entering the atmosphere, said an official at the U.S. Naval Observatory. 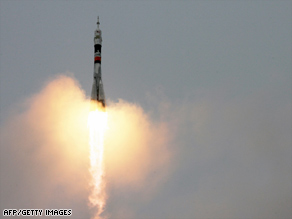 A mysterious flash in the sky Sunday night may have been debris from the Soyuz spacecraft's booster.

The exact cause of the flash that caused hundreds of people to call the media, local authorities and the National Weather Service was still unknown Monday afternoon.

But eyewitness accounts of the color, shape and timing of the light and sound had officials at the Naval Observatory confident of the phenomenon's cause: the re-entry of orbiting space junk from the Russian Soyuz spacecraft that blasted off last week from Kazakhstan.

"An object like this will have a pretty spectacular display when it enters the atmosphere," said U.S. Naval Observatory spokesman Geoff Chester.

Monday morning after the incident, Chester said he traced the rocket booster's path and found it was hovering over Cape Hatteras, North Carolina, around the time people reported seeing the light. iReport.com: Did you see the mysterious flash?

Sunday's mysterious flash and booms also could have been a fireball, a natural phenomenon that occurs when a rock about the size of a suitcase slams into the earth. Naval Observatory officials say that scenario is unlikely in this case, since the space junk was already orbiting in the area.

"The visual reports are consistent with either case," he said. "But the fact that a Russian rocket booster was passing through that area of the sky at the same time, it's a pretty strong factor in my opinion to make that the culprit."

The timing of the light and sounds also indicates it was likely space debris. Chester said it usually takes up to a week for a rocket booster's orbit to decay. The Russian spaceship was launched last Thursday.

The booming sounds were likely noises from the explosion, he said.

There are no reports of damage, weather officials say. Fragments of the object likely landed in the Atlantic Ocean. The likelihood of space debris hitting one's home is pretty remote, Chester said, so residents don't have to worry.

The light and sounds, which shook houses, occurred between 9:30 and 9:45 p.m. and could be seen and heard from southern Maryland to North Carolina, said Jeff Lewitsky, a forecaster for the National Weather Service Forecast office in Wakefield, Virginia.

After receiving dozens of inquiries on Sunday night from concerned citizens, Lewitsky and his team analyzed the radar and satellite loops and determined the phenomenon wasn't caused by weather.

Lewitsky said his office has not had residents report such a sighting in the past 20 years.

Officials have ruled out another possibility: The light was not likely a solar wind or flare, which is a burst of energy that travels from the sun, said a spokeswoman for the Space Weather Prediction Center at the National Oceanic and Atmospheric Administration.

All About Space Debris • Space Technology