(CNN) -- Scientists hailed Tuesday a 47-million-year-old fossil of an ancient "small cat"-sized primate as a possible common ancestor of monkeys, humans and other primates. 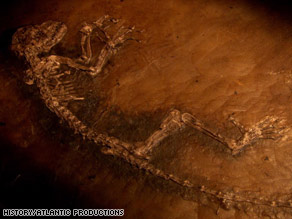 The fossil is believed to be an ancestor of monkeys, humans and other primates.

Scientists say the fossil, dubbed "Ida," is a transitional species, living around the time the primate lineage split into two groups: A line that would eventually produce humans and monkeys, and another that would give rise to primates such as lemurs.

The fossil was formally named Darwinius masillae, in honor of the anniversary of Charles Darwin's 200th birthday.

"This is the most complete primate fossil before human burial," said Dr. Jorn Hurum, of the Natural History Museum at the University of Oslo, who led the study of the fossil, a young female primate.

The fossil was discovered in 1983 in the Messel Pit, Germany, near Frankfurt, and had been until recently in private collections, according to an article published Tuesday in the scientific journal PLoS ONE, a publication of the Public Library of Science. Read the report from PLoS ONE

However, because it was split into two parts, its significance was not immediately recognized.

An international team of scientists, which Hurum led, conducted a detailed forensic analysis of the fossil for the past two years, the release said.

Hurum nicknamed the fossil Ida after his young daughter, he said.

The fossil's body is nearly complete; only part of one leg is missing, according to Hurum. In addition to the bones, the softer features are also preserved, as are the remnants of its last meal: fruits, seeds and leaves, which were found in Ida's gut, according to the scientists.

"It's such a beautiful specimen," Hurum said of Ida. He said the fossil is about 2 feet long, "like a small cat in size."

The fossil has both adult and baby teeth, indicating that it was weaned and about 9 months old when it died, the PLoS article said.

She would have eventually grown to the size of a lemur, the article said.

The young primate fossil does not have two crucial anatomical features found in lemurs: a grooming claw on the second digit of its foot and a fused row of teeth in the middle of its lower jaw, known as a toothcomb, the scientists said.

X-rays revealed a broken wrist, which the team of scientists believe may have contributed to Ida's death, according to a news release from the museum at Oslo.

Ida may have been overcome by carbon dioxide gas while drinking from the Messel lake, which was often covered by a low-lying blanket of the gas, the news release said. Hampered by the broken wrist, the young primate may have fallen into unconsciousness and may have slipped into the lake. The primate sunk to the bottom and was preserved for 47 million years, the news release said.