(CNN) -- The space shuttle Discovery safely docked at the international space station on Tuesday, a welcome smooth maneuver during a mission that was delayed by a gas leak and threatened by hurtling chunks of space junk. 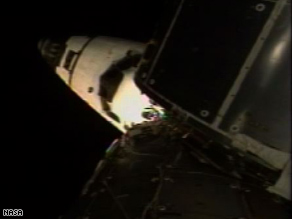 Discovery's seven-member crew, which lifted off from Kennedy Space Center on Sunday night, will deliver supplies needed to expand the space station's capacity, doubling the number of people who can live there from three to six.

The crew also will be dropping off Japanese astronaut Koichi Wakata, who will replace NASA's Sandy Magnus on the station.

Piloted by Commander Lee Archambault, the shuttle docked at 5:21 p.m. ET, about eight minutes behind schedule but without a hitch, NASA said.

"Welcome to the space station, Discovery. We're glad you're here," station astronaut Mike Finke said by radio after the docking.

The shuttle's mission, originally scheduled to start March 11, was delayed after a leak was found in a hydrogen gas vent line. iReport.com: See, share your photos of launches and space

Last week, a piece of space debris traveling at 20,000 mph zoomed close to the space station, forcing crew members to load into an escape vehicle before it was safely past.

Then, NASA announced Monday that another piece of debris, from a Russian space mission, was expected to pass within a half-mile of the station. NASA ultimately announced the station would not need to be moved.

The seven-member shuttle crew will be delivering the final parts needed for an expanded solar energy power system. It also will deliver a replacement for a failed unit in a system that converts urine to drinkable water, NASA said.