KENNEDY SPACE CENTER, Florida (CNN) -- A bat that apparently had trouble flying instead tried to hitch a ride on the space shuttle Discovery, NASA officials said. 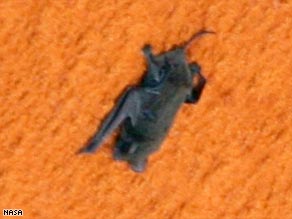 The animal was last seen clinging on the foam of the external tank of the space shuttle moments before the Discovery launched, officials said.

NASA officials had hoped the bat would fly away on its own, but admitted the bat probably died quickly during Discovery's climb into orbit.

Discovery's seven-member crew, which lifted off from Kennedy Space Center on Sunday, is on a 14-day mission to deliver supplies needed to expand the International Space Station.

NASA officials noticed the bat before shuttle's liftoff and brought in a wildlife expert to look at video images of it. The expert said it appeared to be a free-tailed bat that probably had a broken left wing and an injured right shoulder or wrist.

The launch pads at the space center are near the Merritt Island National Wildlife Refuge, so NASA has sirens to scare away animals that get near the shuttles.

The bat isn't the first to try hitching a ride into space. NASA officials said they noticed one of the creatures on a tank of a shuttle in 1998. That bat flew away as the shuttle's massive engines ignited.

The crew of the Discovery safely docked at the International Space Station on Tuesday. It was unclear whether its stowaway was still clinging to the shuttle.