(CNN) -- Airports are a major talking point, whether it's how long you queued to check in your bags or which business class lounge has the best view of the runway. 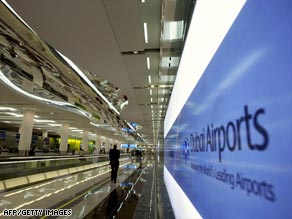 Dubai International Airport's Terminal 3 opened in October 2008 aiming to increase the number of passengers to 60 million in 2010.

What does it take to be the best in the world? What happens behind the scenes to ensure an airport is running like clockwork?

Richard Quest spends a day at London City Airport, from 5 am for runway inspections until 5 pm when the evening flight schedule begins.

He experiences the everyday challenges from baggage handling, to cleaning onboard and even marshalling an aircraft to the stand after landing.

UK Transport Secretary, Geoff Hoon announced that the decision to build a third runway and sixth terminal at London Heathrow Airport would be delayed until the end of January. More time was needed to consider the 70,000 responses to the Government's consultation.

Some argue that better management of European air traffic control is more of a pressing issue than airport expansion. We analyze how a single European sky could reduce delays and help airlines cut carbon dioxide emissions.

New U.S. immigration laws: New immigration rules for passengers traveling to the U.S. come into force on January 12 under the Electronic System for Travel Authorization (ESTA).

Millions of citizens from the 34 visa waiver countries including much of the European Union, Japan and Australia are now required to go online and apply for travel authorization before boarding an aircraft destined for the States. We find out what the changes mean for travelers.