(CNN) -- First trip to Malmo? Here's some insider advice to help you get the most out of your visit. 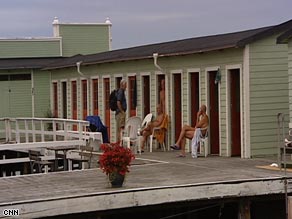 Locals like to take a cold dip after a sauna at Ribersborgs Kallbadhus.

Getting around town Most of Malmo's attractions are reachable by foot, but flat terrain and an abundance of cycle paths also make the city ideal to explore by bike. Rentals run around 120 kronor. You can also jump on the eco-friendly buses that criss-cross the city. Visit the tourist office at Central Station for maps. If you opt for a taxi, be sure to set the price of the trip with the driver before setting off.

Ice cool
For more than a century, locals have been visiting the Ribersborgs Kallbadhus for a steam in the sauna followed by a dip in the Baltic. The swimming baths are open year-round. If you want to blend in with the locals, brave the elements and hit the baths in the winter for an icy plunge. A better time to visit for the less adventurous is in the summer, when the baths are open for sunbathing.

Living green
As part of its post-industrial transformation, Malmo has become a leader in environmental design. The city's green achievements are reflected by the Bo01 housing development, a waterfront regeneration project with a focus on environmentally-friendly living. For the latest in green design, visit the Western Harbor and Augustenborg neighborhoods. For a more informed look, contact the local Environmental Department, which occasionally offers free guided tours of the city's ecologically sustainable areas.

Around the Sound
Malmo is located just 35 minutes by train from the Danish capital of Copenhagen, and every day thousands travel between the two cities via the Oresund Bridge. Trains leave from Malmo every 20 minutes for most of the day. After midnight, service is less frequent.

The two cities are part of Scandinavia's Oresund region -- the transnational area made up of southern Sweden and eastern Denmark. The best way to explore the Oresund region is with an "Around the Sound" ticket, which gives you access to all the trains you need to travel around the area, including the ride across the Oresund Bridge. You can make as many stops as you want as long as you travel in one direction. Tickets are good for two days and also get you discounts to the major attractions in the region. Prices depend on how far you travel and start from 199 kronor.

Feasting on crayfish
Swedes are crazy about crayfish, and outdoor festivities celebrating the crustacean are held across the nation to mark the end of summer. In Malmo, head to Stortorget, the city's main square, for one of the biggest crayfish parties in the world. The massive celebration is held annually to kick off the popular Malmo Festival. Swedes like their crayfish cooked in salty water infused with dill. Blend in with the locals by eating it cold with toast and beer. To really get into the tradition, wash down the crayfish with akvavit, a Scandinavian kind of vodka.