(CNN) -- For anyone yearning to forget about the recession by escaping to a tropical paradise or relaxing on a cruise, finding great travel deals right now isn't hard. Deciding whether to take advantage of them is another matter. 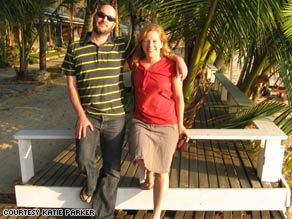 Katie Parker and her husband, Damon Fodge, are going to India soon, but she had second thoughts about the trip.

For many Americans, spending money on a getaway may not be a priority, a possibility -- or even the right thing to do -- amid thousands of layoffs, plunging home prices and shrinking portfolios.

The general misery is even causing some who can afford a big trip to stay put.

Take "NBC Nightly News" anchor Brian Williams, who told the blog TVNewser this month that he and his family would skip a vacation in 2009 because it wouldn't seem appropriate during a time of hardship for so many people.

"We were going to try to get away, but it didn't feel right this year," Williams told the blog.

Other Americans are jetting off, but they're having lots of second thoughts and are watching their wallets closely.

Katie Parker, a Web designer who lives in Washington, is going to India next month to meet her husband on the last leg of his international business trip.

Parker, 33, said she's excited about the vacation but apprehensive about spending $1,600 for her plane ticket in addition to lodging costs and other expenses during the two-week stay.

"Although I think my job is probably safe, you never really know," Parker said. "Part of me thinks maybe we should have waited on this trip."

She added, "But I also feel like it's a once in a lifetime thing. I don't know when I'm going to get another chance to go to India so we're just going to do it."

Parker and her husband, Damon Fodge, are usually frugal while traveling, staying in hostels and other inexpensive lodgings, she said, but they will be especially careful about spending money during this journey.

Parker recalled feeling devastated after a layoff several years ago and said the possibility that it might happen again would be on her mind.

The fear over what could happen is causing many people to put their lives on hold and hunker down because they don't feel in control, said Nancy Molitor, a clinical psychologist who practices in suburban Chicago, Illinois.

"There's a huge psychological component to any recession and this one, I think, in particular ... because it's gone on for so long," Molitor said. "Anxiety is contagious."

She also has heard from patients and friends who are affluent but who feel embarrassed about spending a lot of money on travel right now. Some have "survivor's guilt" and are downplaying their vacations instead of feeling excited about them, Molitor said.

Brian Morton, a manager at a movie studio in Los Angeles, California, said talking about his travel plans with friends who are already unemployed -- and for whom travel is out of the question -- can be uncomfortable.

"You don't want to seem like you're bragging," he said.

Morton, 37, is planning to spend at least $3,500 on a weeklong trip to Aruba this summer, even though there have been layoffs in his industry and he's not entirely sure his job is safe.

"I don't think I'm going to stop vacationing just because of the recession," he said. "[But] I scrutinize my budget a little bit more. ... I want to get the most bang for my buck when it comes to hotels and that kind of thing."

Where the deals are

Americans such as Morton who are willing to travel right now may find globe-trotting much more affordable than before.

"It's the best time in years to book a vacation; the deals are outstanding," said Genevieve Shaw Brown, senior editor at Travelocity.

Hotels are offering some of the best values, especially in cities such as Las Vegas, Nevada; New York; and San Diego, California, she added. Bargains also can be found in Hawaii and Canada.

Watch how to find off-season deals »

For sea lovers, cruises are among of the best values this year, Shaw Brown said, though she urged people to consider the additional money they might have to spend on shore excursions, alcohol and other extras.

Depending on where you go, the current travel discounts and incentives can mean that a vacation that might have cost $4,000 a year ago now costs $2,500, said Rey Alton, leisure marketing director at Travel Leaders/Almeda Travel in Houston, Texas.

"Some people say, 'I'm going to have to hold off until next year or maybe the year afterward,' but [those who want to travel now] are really the ones who are finding deals," he said.

Mexico and the Caribbean are the biggest destinations on sale right now, he added.

Molitor urged people to be mindful of their budgets but to try to avoid thinking they're stuck and have no options.

"If they get away to a vacation that they could afford, that could be very good for them," Molitor said. "Some people are so down that they're missing opportunities."

All About National Economy • Travelocity.com LP