(CNN) -- The Mojave boneyard in the California desert is where old airplanes go to die -- a wasteland of decrepit planes, titanic heaps of titanium and aluminum waiting to be scrapped for metal in India or China. 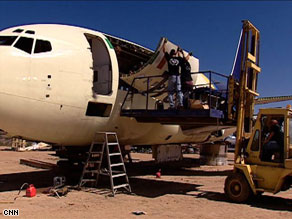 Plane boneyards are a rich source of spare parts for MotoArt to create their functional furniture.

But for Dave Hall and Donovan Fell, the boneyard is only the beginning.

They own MotoArt, a company based in California that turns old aircraft parts into high-end furniture and functional art.

From beds and desks to light fixtures and wall partitions, Hall and Fell say they are doing more than reinventing cast-offs from retired planes, they're creating pieces of aviation history.

"Once they are gone we can never get them back again," said Hall of the abandoned planes at Mojave.

"So what we like to do is actually take these aircraft parts and preserve them and give them a second life in some really fun, functional art."

MotoArt began in 2000 when Hall and Fell, former co-workers at an architectural sign company in Los Angeles, collaborated on an art exhibition that showcased Fell's polished B-17 bomber propeller sculptures.

See before and after photos of recycled plane parts »

"We sold out the entire show, and the gearheads all loved it," said Fell. It was then that the duo realized their unique art project could have a much wider audience.

Encouraged by the success of the exhibit, the duo began exploring the nearby Mojave boneyard for more than just propellers -- B-25 rudders for desks, 747 jet engine cowlings for beds, F-4 ejection seats for, well, ejection seats.

"Who's never wanted an ejection chair?" laughs Fell, sitting in the company's studio in Los Angeles, where the MotoArt team bring back the treasures they find in the Mojave Desert.

Watch Dave Hall at work at the Mojave boneyard »

The duo's most popular pieces of 'functional art' are their desks, ranging from the sleek 8-foot DC-9 tail stabilizer desk, which retail at around $15,000, to the imposing 14-foot DC-4 conference table, which costs a whopping $60,000.

According to Hall, hundreds of hours are sometimes spent cutting, sanding, polishing and surfacing a single piece. It took the MotoArt team 220 hours to turn a single 747 cowling, the large shiny aluminum strip covering a jumbo jet engine, into a spectacular 8.5-foot diameter chrome receptionist's desk.

Hall said it takes hundreds of hours to produce a fuselage partition, from using a chainsaw to slice 10-foot sheets out of the main section of a plane, to polishing and readying it for the showroom floor of the Dutch carmaker Spyker, which has commissioned MotoArt to create exhibitions for the company around the world.

Hall and Fell began the company out of their garage, and now have 15 employees and a 12,000 square-foot studio with a showroom that could double as an aviation museum.

"It's like a larger version of my room when I was 10 years old," says Fell of the MotoArt headquarters.

But MotoArt is anything but child's play -- in just nine years the company has carved out a niche in the high-end furniture market, creating a multi-million dollar business thanks to a wide range of corporate clients.

The company counts Boeing, Microsoft, Red Bull and the United States government as happy MotoArt customers, as well as a number of airplane enthusiasts and celebrities.

But for Hall and Fell, it is the preservation of the planes that gives them the greatest satisfaction.

"It's heartbreaking to see these planes that have serviced our country for decades being crunched up and destroyed, and it gives us a little piece of heart that we are able to recycle this and give it a second life," he said.