(CNN) -- The "best job in the world" contest has generated huge interest around the globe, but the jury is out on whether that will translate into more tourism dollars for Queensland, Australia. 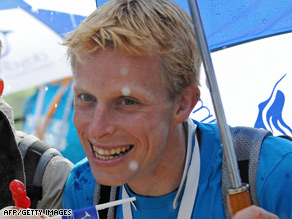 "Quite frankly you can have $150 million worth of publicity, but if it doesn't generate sales you've really wasted your time on a pretty story."

A British man beat 34,000 other applicants Wednesday to win the right to stroll the white sands of a tropical island in Queensland, Australia, file weekly reports online to a global audience and earn a cool $100,000.

Watch as lucky winner is revealed »

Sixteen finalists were flown in to Hamilton Island on Monday for interviews with a four-person panel. The job starts July 1.

The "world's best job" campaign was 18 months in the making as a way to lure more tourism to the 600 islands near the Great Barrier Reef.

"The starting point was how do we get the message out there ... that they're open for business and we want people to come and visit," Hayes said. "The idea of this is to protect jobs throughout our regional parts of Queensland."